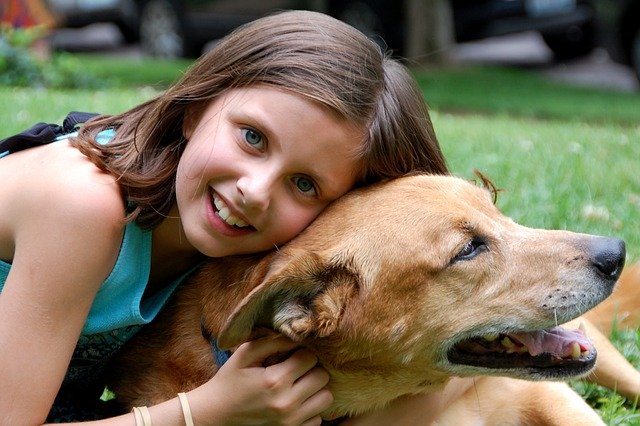 If you’re a parent, then you want to bring your kids up the right way. That means instilling values in them that you hold yourself. You want to impart the wisdom you have learned, but you also want them to be decent, responsible society members.

Lots of children beg their parents to get them a dog. Maybe you’ve thought about it, and you’re on the fence. Smaller pets, like mice, gerbils, rabbits, etc. are much easier and cheaper.

However, there are reasons why you might decide to give in and get your child or children that dog. Here are a few of them.

It’s a Companion for Them

They train some dogs to be emotional support animals, and these can help humans with:

Your child might not have any of those things, but that does not mean they don’t need a friend sometimes. Perhaps your child has experienced either cyberbullying or the in-person variety.

These are things that, as a parent, you’ll do everything in your power to prevent. Sometimes it’s unavoidable, though. Kids can be cruel, and you can’t entirely protect your child every moment of the day.

Having a dog to cheer them up is a great way to counteract this. Dogs love unconditionally, and once the dog you get bonds with your child, they should be constant companions. On the occasions when the world gets your child down, it’s nice to have a dog there to cheer them up.

It Teaches Them Responsibility

If you’ve ever argued with your child about getting a dog, one of the reasons you might have denied the request is because you don’t want to get stuck taking care of it.

You almost certainly have work to do, and when you come home exhausted after a long day, likely the last thing you want is to take the dog for a walk or have a situation when a dog misbehaves.

On top of that, you need to:

It’s a significant responsibility, but maybe that’s just what your child needs. Before you agree to get the animal, you can sit down with them and hash out all the details, like you may need to find puppy pads to help during the potty training phase.

You can tell your kids that they’ll be the ones feeding the animal, walking it, picking up after it, etc. Inform them that if they can’t do that, you’ll take the dog back to the shelter.

It may be an empty threat, but the idea is for your kids to take on a big responsibility for the first time, and that’s a lesson you want to teach them early.

It Will Teach Them that Animals Have Personalities

No two dogs are the same. They’re just as different as humans are. That’s something that it’s useful for a child to learn.

If they learn that all dogs have personalities, that might be part of what it takes for them to be kind to animals throughout their lives. They might love having a dog so much that they continue to have them for as long as they live.

Many studies indicate that having dogs increases human lifespan, so starting your kids with a companion animal at a young age is a healthy thing to do. When they’re adults, they might still have dogs, which can get them through some tough times and comfort them when they need it.

It Will Teach Them Patience and Empathy

One of the most significant differences between kids and adults is that kids do not have empathy yet. They’re self-centered, and only as they get older will they come to realize that other people have thoughts and feelings.

A child might feel that you’re being unfair as a parent if you punish them because they did something wrong. As a dog owner, they may quickly come to realize how frustrating it can be if the animal chews up one of their favorite toys or destroys their clothing.

It’s quite similar to your frustration as a parent if your child does something wrong. If your child grasps the concept that it bothers them when the dog misbehaves, they might also realize that some of their actions have an adverse reaction with you. It will make them more considerate.

It Will Encourage Them to Exercise

Childhood obesity is an all too common problem these days. It comes from kids living sedentary lifestyles. They lie on the couch and play video games after school rather than going outside and playing in the fresh air.

If you get a dog, that will incentivize your child to exercise. If you get a puppy, then the animal’s energy will continue for years to come. That means the child will probably have to walk it multiple times each day, in almost any weather.

As part of your agreeing to get the dog, the child has to make sure that it gets its exercise, and they’ll get some themselves as well.

It Will Teach Them About Mortality

There is one more lesson that having a dog teaches a child, and that is about mortality. Because a dog’s lifecycle is shorter than a human one, it makes sense to think that the dog will die at some point, hopefully after a long and healthy life.

It seems cruel to think that a dog can teach a child about death, but if they haven’t encountered it before, this might be something that’s good for them to experience. No one lives forever, either human or animal, and a dog’s passing can show them that every life concludes.

It’s sad, but it’s also a natural thing, and it’s useful for a child to experience it eventually.

Taking care of a dog can be a lot of work, but they also bring a lot of love to the equation. It’s more than likely that if you decide to cave and get one for your child, everyone in the family will come to love the animal.