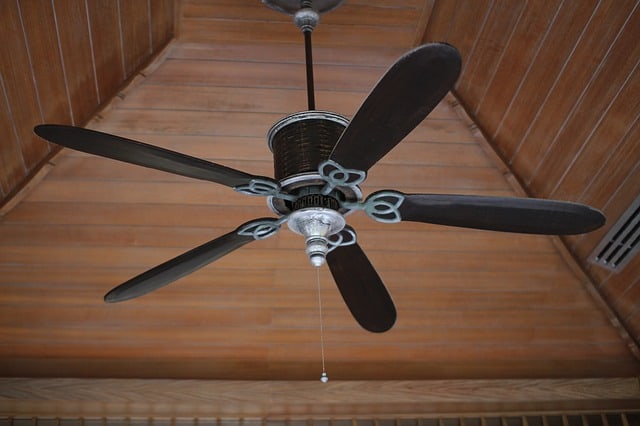 Turn Off the Electrical Circuit

Before you get to work on changing out your ceiling fan, you need to make sure to turn off the electrical circuit you’ll be working on. If you don’t, you could be seriously hurt or killed by an electrical shock. Go to the breaker box and flip the correct switch to the “off” position. Then go to the room where you’ll be working and flip the light switch or stick a voltage tester into an outlet to make sure the circuit is dead.

Take Down the Fixture You Want to Replace

Now it’s time to get started. Get up on a ladder and take down the fixture you’re replacing. If it’s a light fixture, simply remove the glass shade or globe and then unscrew the screws holding the fixture in place. Pull the fixture down and disconnect the wiring. If it’s a ceiling fan, remove the blades and light fixture from the fan first, then undo the screws holding the fan canopy in place, pull it down, and pull the wiring out of the electrical box in the ceiling. Disconnect the wiring, then take the fan motor down and set it aside.

If you are swapping out an old ceiling fan for a new one, you probably already have a fan-rated electrical box and fan brace in your ceiling – otherwise, your old fan would have come crashing down long ago. But look in your ceiling to verify that you have the right kind of electrical box and that there’s a fan brace to anchor your fan to – or, alternatively, that your fan is anchored directly to a ceiling joist.

If you’re taking down an old light fixture to replace it with a ceiling fan, make sure you can either anchor your new fan directly to a joist or that you’ve installed a fan ceiling brace in your ceiling. You can buy expanding fan braces that you can insert into your ceiling from below, but if you can get to the joists from above, you can install a piece of two-by-four between the joists in the appropriate place. Anchor it to the joists using 1.5-inch screws. Remove the electrical junction box that held your light fixture up and replace it with a fan-rated box attached to the fan brace. Once you have the fan brace and electrical box in place, you should attach the ceiling bracket that came with your fan to the electrical box.

Your fan will come with instructions to help you assemble the motor, which you should do on the floor. Most indoor and outdoor ceiling fans have a downrod that attaches to the motor housing with pins, and you can pull the wiring up through the downrod. The top of the downrod should connect to the ceiling bracket – most fan ceiling brackets have a hook so you can hang up the fan motor while you’re connecting the wiring.

But if you have the right wiring on both sides, just connect it up, matching the colors together, so black connects to black and so on. Strip the ends of the wiring if necessary, so you have bare ends to twist together. Secure the wiring connections with wire nuts.

Secure the Fan Downrod and Canopy

Screw on the Fan Blades

The fan blades will come with corresponding blade irons that have to be attached to the fan blades and then to the motor housing. When you attach the fan blades, make sure they’re all the same distance from the floor.

Congratulations! Now you’ve swapped out your own home ceiling fan, and can enjoy years of cooling breezes from your new fan.