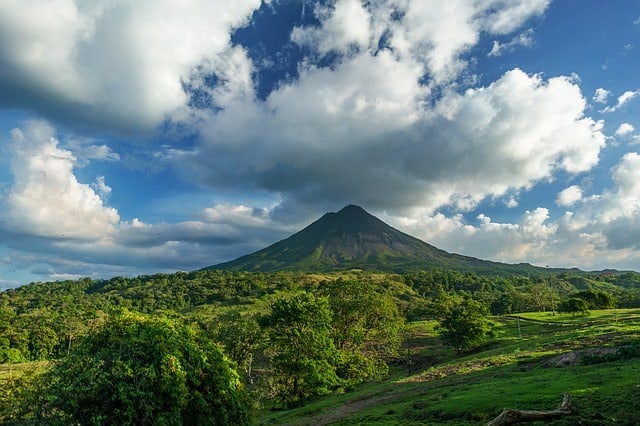 Do you know that volcanoes provide us with a reflection of human life? Some are alive and kicking, some are dead inside, some burst out at the slightest infliction of pain and some hold on for too long before exploding.

This must be the reason that volcanoes have been the inspiration of many renowned artists who have immortalized the pivotal existence and massive physical presence of the volcanoes.

Nonetheless, it is safe to assume that each individual has a unique and creative way of looking at the same thing. Here https://www.1st-art-gallery.com rounded up the top five volcanoes artworks to capture the uniqueness of this beautiful tragedy through their landscape art.

John Martin was a romantic English painter, internationally famous for his ability to give life to religious subjects. He was referred to as the most popular painter of his day by Thomas Lawrence.

In ‘Great Day of His Wrath’- one of his most famous volcanoes artwork, he painted a volcano creating a conflict in the sky. This painting particularly appeals to those with inexplicable chaos inside.

It is believed that he was inspired by industrialization and its growing impact to paint this visual. Unfortunately, John met with misfortune in terms of popularity and even after his death his work was merely sold for seven pounds. However, it wasn’t until recently that his work got acknowledgment and deemed as one of the incredible volcano paintings.

2.     Jacob Philippe Hackert – ‘Landscape with the palace at Caserta and Vesuvius’

He along with many other artists was inspired by the great eruption of Vesuvius and has illustrated the volcano’s existence from different perspectives.

In this volcano artwork ‘Landscape with the palace at Caserta and Vesuvius‘, he has beautifully created a very distant view of the volcano where the people are not bothered about it and carry on with their daily lives. From a distance, it does not seem dangerous at all.

It looks utterly calm and serene. Little do the people realize its potential to cause massive and irreversible destruction!

Josepf Wright of Derby was an English painter and illustrator incredibly famous for being the first professional painter who expressed the spirit of the industrial revolution. Known as the ‘painter of light‘ due to his clever and skillful play with highlights and shadows, his expertise can be seen in ‘Vesuvius from Posillipo’.

In this illustration, he has painted a volcano on the left and showcases the clear skies merging with the grey and red sky above and around the volcano.

While some may interpret the masterpiece as the breeze of relief whistling over the inflicted pain, others look at it from a different angle of a volcano slowly engulfing the whole sky.

Brought to life in England in the year 1774, this extraordinary magnum opus has inspired many others to go witness the volcano and make this nature’s creation of their favorite muse.

Famous for being a watercolorist, Josiah Wood Whymper was also a wood engraver and book illustrator. His works have been preserved and showcased in the Victoria and Albert Museum in London. One of his landscape art ‘Air Volcanoes near Carthagena Columbia’ shows air volcanoes of Columbia.

In the painting, the audience can spot a few women chatting and going about their business since no danger is in the offing.

That’s not all! This masterpiece shows how something super daunting does not have to be feared all the time. While it poses a great threat as it is capable of colossal damage, it is not fearful all year around.  It can also be seen as the fire of passion upon whose death the enemies start to flourish!

5.     Sebastian Pether – ‘A Coastal Landscape with a Volcano Erupting by Moonlight’

‘A Coastal Landscape with a Volcano Erupting by Moonlight’ is an amazing masterpiece created by an English painter, Sebastian Pether, who is an expert in landscape oil painting.

He was engulfed by the beauty of sunsets, moonsets, and firelights. And in this work of his, Sebastian has painted a volcano eruption and a moon shining in the background.

This shows that no matter what happens there is always hope and that the moon will make the tides rise again. This is a perfect companion for those with wishful thinking and on the outlook for hope.

Many believe it to be relatable to his life as he led a somewhat disrupted life due to his economic condition. He had to sell his painting to dealers only to make ends meet.

While some paintings of the volcano can be quite intense, they surely make an extraordinary work of art to accentuate your gallery wall.

It may be a Herculean task to get hands-on the real masterpiece; you can always go for the reproductions that are the perfect replica of the original one, but more economic and easily available!