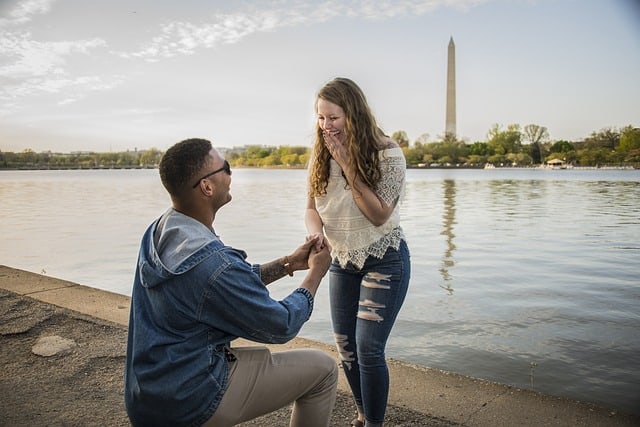 So you’ve found the person you want to be with for the rest of your life – congratulations! Believe it or not, that was the easy part. Now comes the formidable task of sourcing an engagement ring before asking the all-important question.

You want to find a ring that perfectly suits your partner’s personality and one that shows off just how much they mean to you. Before you start questioning whether or not you know them at all well enough to take on this task, you should first set a budget. When embarking on the buying process, it is important to remember that there are no rules around how you’re expected to fork out. Only spend an amount you are comfortable with.

Here, we debunk a few of the most common myths around the price of engagement rings to hopefully give you a better understanding of how much you should be setting aside.

How many months’ wages?!

Everyone’s heard the proclamation that the buyer should spend a whopping three months’ wages on the engagement ring as an expression of their devotion. But before you reach for the calculator, you might be interested to hear the true origin of this ‘myth’.

This revelation stems from a marketing ploy by jewelry company De Beers in the 1930s, who were looking to increase sales during the Great Depression. They initially declared that one month’s wages should be spent on the ring, and it wasn’t until many years later this figure rose to two and then three months’ worth.

The cleverly thought-out campaign was intended to link diamonds more closely with engagement rings, and it’s hard to argue against the fact that it had a revolutionary impact on the industry. Whilst diamonds are still very much synonymous with engagements, the myth that you should dedicate three months’ pay to purchasing the ring is an outdated concept.

The way that diamonds are priced and graded, bigger doesn’t necessarily mean better. Whilst the diamond’s weight (carat) does have a considerable effect on the overall price, its color, clarity, and cut will all have a part to play, too. For instance, a smaller diamond of higher clarity could attract a higher price tag than a larger diamond of less quality.

There are many more factors that play a role in determining the price of a diamond. For instance, a stone that has been certified by a gemological institution like the GIA (Gemological Institute of America) will often yield a higher price, since its quality has been guaranteed.

Second-hand will always be better value

It’s true, the sentimental value for a second-hand ring that’s been passed down through generations cannot be matched by any high street substitute. It is also true that price wise, a used ring will often have a cheaper upfront cost than a new one. However, particularly if you’re not going to buy from a verified jewellery outlet, older rings can cost you much more in the long run.

As these rings have been worn already, they will be far more likely to show signs of damage and wear, which can ultimately compromise its aesthetic value. You might have considered going down the second-hand route to help in affording the biggest ring possible, but if this isn’t to your partner’s taste, you will be far better off buying a smaller, new ring of better quality which might suit their style far better.