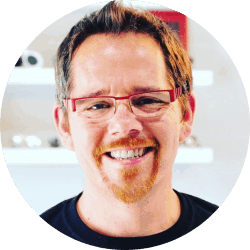 Jeff Campbell is a dedicated father to 3 amazing kids, an avid blogger, foodie, would-be musician, and practicing martial artist. He currently runs 11 websites and helps over 500,000 people each and every month through his blog posts.

My name is Jeff Campbell.  I’m in my 50’s and live in Wimberley, TX (outside of Austin).

I’ve lived all over the country but we moved to Austin when I was 10, so I more or less consider that home, but I’ve also lived on both coasts and in the deep south.

I have 3 daughters, 2 of which are approaching their teenage years, and the other is a toddler.

My Experience in Personal & Business Finance and Work Story

I recently worked as the Academy Director for Life Ki-do Martial Arts, running the business end of a large martial arts school with 2 primary and a few satellite locations and have been doing that since 2013.

In conjunction with the owners, I am responsible for tracking sales, expenses, profit, and loss, in addition to handling some of the marketing for the school as well as billing, customer service, and all minor repairs to the facility.

We have over 500 students all locations combined, so I have between my being a Dad and running the school, I have become an expert on parenting and interact with hundreds of parents and kids each and every week.

I left that job in September 2020 after my blogging business took off. I now do that full time.

Prior to my last position, for most of the past 25 years, I worked in mid-level leadership positions for Whole Foods Market.

Over the decades with Whole Foods, I learned an enormous amount not only about running a large multi-million dollar business, but also all aspects of running a large facility; from hiring, firing, customer service, and detailed financial reporting.

But on top of that, I also learned a great deal about health, healthy eating, and food in general.

I know Whole Foods seems like a huge multi-national corporation now (especially since Amazon bought them), but believe it or not, there were only 5 stores in the company when I started.

I have a number of posts geared towards budgeting, paying off debt, saving money, earning money on the side, and personal finance in general.

Just know that I write about what I have done and am doing. With regard to money handling and personal finance, I have been in charge of our family’s budget for over a decade at this point!

Our family’s money hero is Dave Ramsey and we were lucky enough to meet him at his studio in Nashville. Here we are (minus our newest Daughter and plus my now ex-wife) hanging out with Dave Ramsey. 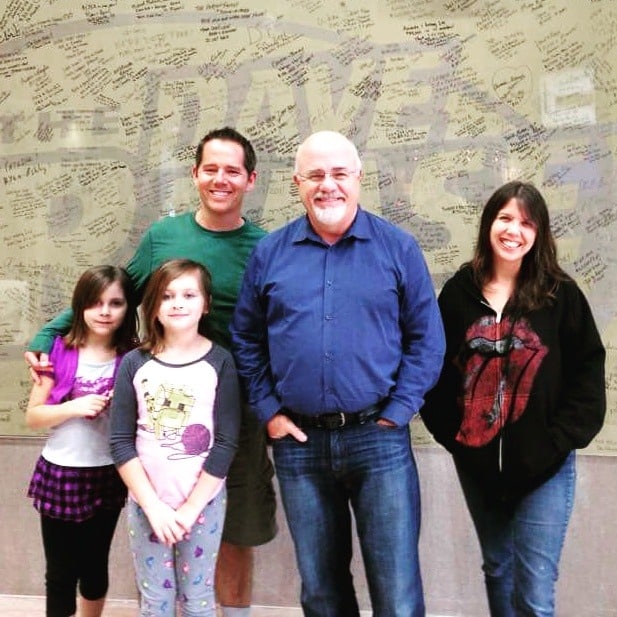 My ex-wife and I first started budgeting, learning how to pay off debt and live on less than we earn while living in Dallas around 2007. Ever since then, we’ve paid off over $60,000 in debt, sold a house we couldn’t afford, and paid off our cars (and traded down on cars).

Then we set about putting a financial path in place for our future that was sustainable. That included:

AND, I still make a written budget for our household each and every month that my wife and I stick to, agree to and use to make financial choices. I don’t have a degree in finance, but I learned at the school of hard knocks.

But I also spent more than 2 decades with Whole Foods Market where, as General Manager, I was responsible for store budgets, profit and loss in the millions of dollars taught me a great deal about finance.

I am a contributor to Bublup, and among my many personal finance contributions, you can check out the Ultimate Guide to Household Budgeting or How to Manage or Repair Your Credit Score.

In addition, I’ve been quoted by dozens of financial blogs and websites, from OppLoans to GoBankingRates, to GrowAcorns, to MagnifyMoney.

My Experience as a Husband and Father 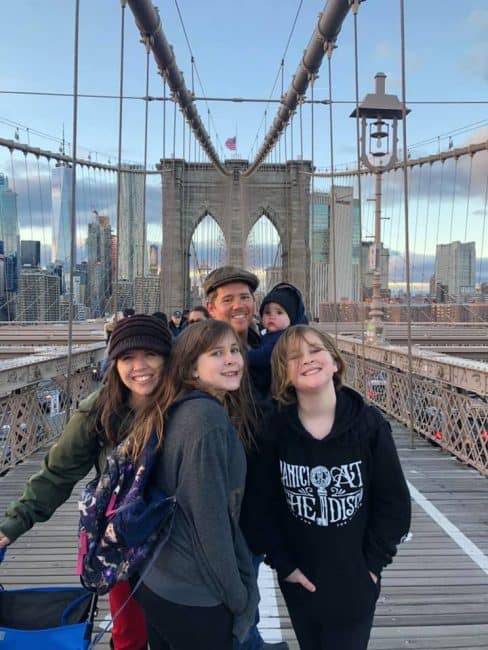 It’s sad, not because my 1st relationship was destiny or “the one”, but because of what it did to me and my ex-wife, and the negative things that naturally come from a divorce. Luckily, we did not have any kids as I know first hand what it’s like growing up as a child of divorced parents.

However, after a few failed relationships, I met my 2nd wife in 2005 and we married a year later. I’m also a firm believer that everything happens for a reason and is interconnected. Thus, without all my previous missteps, I wouldn’t be where I am today (which I wouldn’t trade for the world!)

My 2nd wife and I had a lot of great times, but we also both brought a lot of baggage into our marriage.

After what I would best describe as a mid-life crisis, she opted to divorce suddenly out of the blue in April of 2021. Initially, she didn’t even want custody of the kids, but I talked her out of that. So I now navigate life as a single-dad and reluctant co-parent.

I love the work of Dr. John Gottman and our first marriage therapist was trained in the Gottman method and introduced us to that and his amazing and transformative book, the 7 Principals for Making Marriage Work (click to read my review of that book).

So just know that my posts on marriage and relationships bring a lot of truth, wisdom, mistakes, pain, and love to them.

Of course, it wouldn’t be much of a blog about being a Middle Class Dad if I wasn’t actually a dad!

Outside of work, I like to spend time with my kids and through their time in elementary school, I often spent hours each week helping in their classrooms. Once they hit middle school it wasn’t nearly as “cool” for me to be at their school but the teachers are also a lot less enthusiastic about in-class help at that age too.

But given my love of personal finance and budgeting, I also served as treasurer on the PTA at the last elementary school my girls attended.

I became a dad later in life.  But after 3 daughters, the oldest of whom was born in 2007, I’ve learned a lot about parenting, communication, motivation, and the importance of being there for your kids. Of course, in my day job at the martial arts school, I also see and work with hundreds of kids and parents each week, from age 3 and higher.

Since I did that job from 2013 to 2020, and I’ve been a dad since 2007, I’m confident that while far from perfect, I do know quite a bit about kids and parenting, including the lessons learned from my own mistakes and my own childhood, and am happy to pass that on it my blog posts. 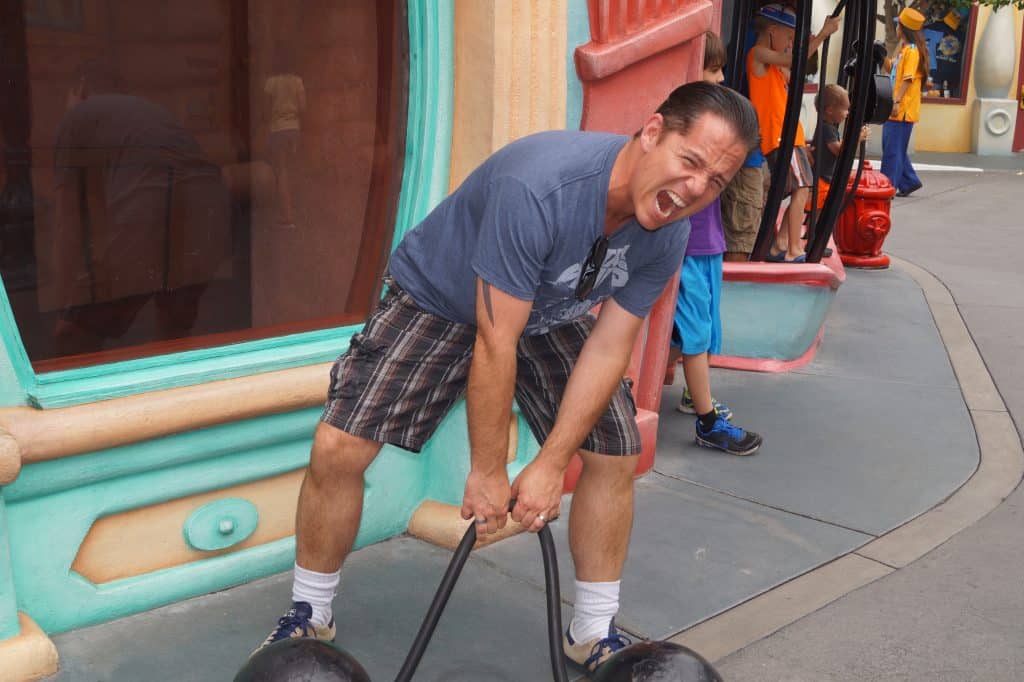 Both for work and pleasure, I’ve been all over the US as well as the UK, Europe, Canada, Mexico, and (perhaps my favorite), Costa Rica.

When I was a General Manager for Whole Foods, I traveled across the US from coast to coast, but also went to Mexico (twice). With our family (our kids pretty much go everywhere we go), we’ve done New York, RV trips up to Yellowstone, Santa Fe and flown many times to Costa Rica where my wife and I plan to eventually own a 2nd home in.

So when you see my post on travel, just know they too, are from the heart and based on our actual travel experiences. That includes not only recommending how to travel with kids in a way that doesn’t drive you crazy, but also how to save money doing it.

I have many posts about Disney parks, and there’s more to come!

After all, outside of traveling to Costa Rica, Disney trips rank as our next favorite places to go. Check out my Bublup contribution called The Best Tips and Tricks for an Outstanding Disney World Vacation.

My personality and style

We lead busy, but fulfilling lives.

Our time is short, so we try and make the most of it.  Being in my 50’s, it’s important to stay healthy.

After all, I want to be around this world for a long time, so I eat healthy, train in martial arts 3 times a week and, most importantly, try and maintain a positive outlook on life and not let stress control me.

That’s me (kind of).  I’m just a bit sunnier (a lot actually), don’t smoke, and am nerdier, but I am a walking bastion of useless music and movie trivia nonetheless.

If it weren’t for the sports section, I would rule Trivial Pursuit!

AS A MARTIAL ARTIST

I have dabbled in Martial Arts my whole life, but always very sporadically and without true commitment.

I did karate when I was a kid & judo when I was in my 30’s, but it wasn’t until I found myself in need of a new job/career in 2013 that I really unleashed my passion for it.

I practice typically 3 times weekly and have consistently since 2013.

Our practice blends Brazilian Jiujit-su with some elements of Karate, Qigong, Tai Chi Chuan, and filters everything through the lens of the Russian martial art called Systema.