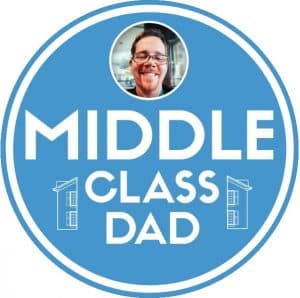 Middle Class Dad is a blog with articles on parenting, marriage and relationships, personal finance, travel, home DIY, and more. It was founded by Jeff Campbell in 2016 and currently helps over 60,000 people every month.

In addition, Middle Class Dad has been featured as a contributor in Lifehack and Bublup, and been used as a resource everywhere from the Washington Post, to Reader’s Digest, and many other places.

Middle Class Dad started simply as an idea in early 2016. The idea was to have both a creative outlet for writing about all the challenges and joys that founder Jeff Campbell faced as a husband, father, son, employee, homeowner and more.

After a simple check for the name being used elsewhere and a few other name ideas, Jeff settled on the name Middle Class Dad in early May of 2016. He started a Facebook page first feeling like he needed to have content written before launching the website.

That was a mistake.

Most likely someone with a lot of entrepreneurial spirit saw Jeff’s interest in the name and registered it before Jeff could in the hopes of later selling me the name for a large sum.

At any rate, if you plan to start a website, don’t delay in getting your domain name registered!

THE GROWTH OF MIDDLE CLASS DAD

Generally speaking, the site gains about 5-10% growth each and every month. I used to also focus on growing my social media platforms but put almost no energy into that today.

Because you can spend a LOT of time constantly posting socially, adding followers on Twitter and Instagram, uploading videos, doing Facebook live or Instagram stories, and in my experience at least, it brought very few visitors to my blog.

In fact, in the past 30 days, I got 357 to my blog from Facebook and I haven’t posted consistently there since I stopped last April.

By comparison, that same 30 day period from a year ago when I was spending a ton of time posting 2-3 times a day, I got 335 visitors from Facebook.

So I actually get a few more people now than I did then and I spend almost no time on my business Facebook presence.

Make no mistake. Facebook ads can be a good way to sell products and services, but Facebook makes its money from ads. My posting my latest parenting tip makes them nothing. So out of the thousands of followers I have on Facebook, I’d be lucky if 50 people saw my post.

So Facebook, and other social platforms, for me, are a time suck. I’d rather spend that time writing awesome content that helps people AND helps bring more people to my blog.

Demographically speaking, most readers of Middle Class Dad are based in the United States (76%), with a small portion coming from:

And then a small blend of readers from India, Australia, and South Africa.

The vast majority of readers are between the ages of 25-44 and almost 80% are women. They are family-focused, and into food, home and garden, home repair, travel and more.

Since starting Middle Class Dad, I have since launched almost a dozen other sites, and there are probably more to come.

With my 20+ years of Whole Foods Market experience behind me, I launched this site in January 2019 with a focus on food and cooking tips, small kitchen appliance tips, as well as foodie topics. It is not, however, a recipe site. Instead, it’s designed to address common problems and challenges in the kitchen and inspire a passion for cooking.

I’ve owned 4 hot tubs over the past 12 years and am a definite hot tub lover. I decided to start this site to help address all the questions I had in the early years of owning a hot tub (and some I still have). I started this site in July 2019. So if you’ve ever wondered what the best hot tub chemicals for sensitive skin are, or how to fix a waterlogged hot tub cover, my site is for you!

Again putting my 20+ years of experience to work, I started this site in August 2019 after I spent a few days consulting with an old friend of mine who is still in the grocery business (in San Diego). I realized that I actually had a wealth of knowledge that could be helpful for anyone starting, running, owning, or even just working in a grocery store. I cover everything from merchandising to HR, just like I did when I store wore the apron.