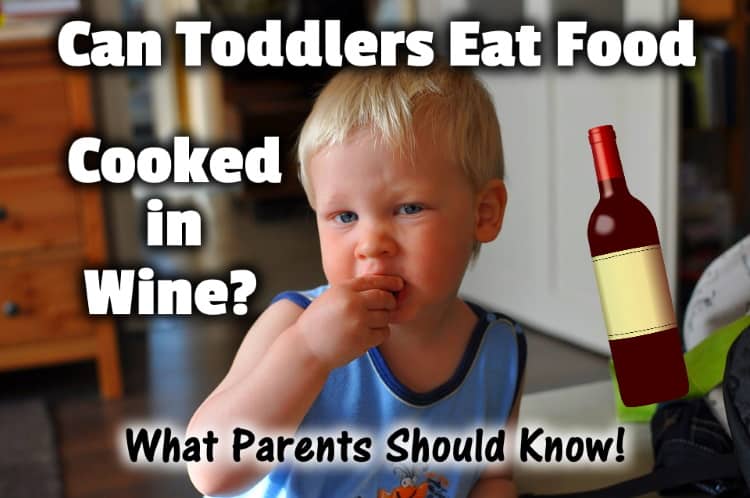 I have a toddler in my wife, and I do occasionally use recipes that call for wine. So we’ve wondered can toddlers eat food cooked in wine?

I decided to look into it and here’s what I discovered:

Food that has been cooked with wine (or beer) for 90 minutes or more is perfectly safe to give to toddlers. Contrary to popular belief, all alcohol does not cook off when cooked and some methods leave up to 85% of the alcohol remaining. But avoid giving toddlers food cooked with liquor.

But there’s a great deal more to know about cooking with wine (or beer) and does the alcohol cook out. So we’ll explore if it cooks out and if so, how long and high of a temp that takes.

I’ll also take a look at whether there’s any difference between white and red wine, what the most appropriate cooking methods for making sure the alcohol dissipates, and we’ll talk about some non-alcoholic substitutes if you prefer to go that route.

That way, you can rest easy knowing your kids aren’t accidentally ingesting alcohol.

Does wine cook out of food?

Not fully is the short answer.

Most of us, myself included have long heard the urban myth that cooking removes alcohol. Most people have never questioned that either.

But it’s not really accurate. Traces of alcohol do remain by the end of the cooking process.

Back in the ’90s, the Nutrient Data Lab, which is part of the U.S. Department of Agriculture conducted a study titled “Alcohol retention in food preparation”.

In that study, they used 6 different recipes and cooking methods to test the theory. As you can see in their chart, some recipes like pot roast only had 4-6% of the alcohol left when serving.

But a Grand Marnier sauce, by comparison, which had the alcohol added to the sauce mix at 195° degrees, retained up to 85% of the alcohol; not what you want for your toddler!

So how much alcohol remains? Check out their handy chart. 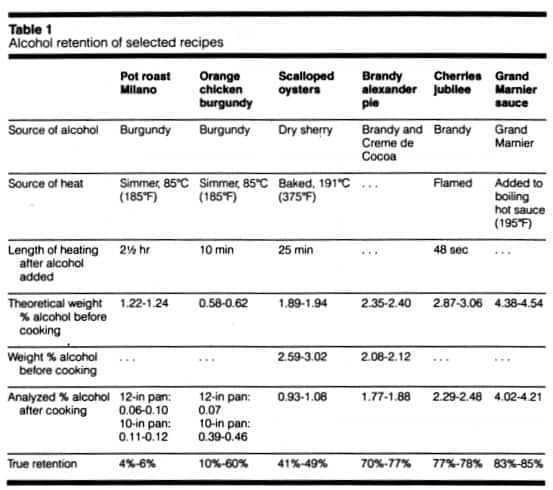 So what accounts for the differences in alcohol retention?

The study found that the type of heat used made all the difference.  Simmering seemed to produce the best results.

So if you’re making a fancy dinner with a wine reduction sauce that has been simmered for hours, you’re likely going to be just fine.

Pot roast is a great example of that having been simmered for 2 1/2 hours.

The oysters, on the other hand, were baked a higher temperature, but for far less time with much less direct heat. So it makes sense that they still retained almost half the alcohol of when the dish started cooking.

But as the study concludes, “the assumption that all alcohol is evaporated when heat is applied during cooking is not valid.”

The factors they found that influence alcohol cooking off the most include:

So if you are cooking with alcohol and planning on feeding it to your toddler or other kids, pay close attention to those things!

How long should you boil wine to remove the alcohol?

As a general rule, when boiling regular wine on the stovetop, it takes about 30 minutes for the alcohol to cook off.

Alcohol boils at a lower temperature than water. The boiling point of wine is 186.8°, compared to water which boils at 212°.

Technically, products can be considered non-alcoholic when the alcohol content reaches .5%. So how long does that take?

Well as we learned in the above section, that depends on the heat source, cooking time, and a few other factors.

This handy chart courtesy of the US Department of Agriculture may help in getting you some answers though for other cooking methods and how much alcohol remains:

How many hours of cooking is safest?

To be totally safe when cooking foods with wine, simmer foods for at least 2 hours. Make sure to add the wine at the start of that to ensure only a trace of alcohol remains by the end of cooking.

Thinking about a Crock-Pot?

The slow cooker’s lower temperatures mean it will take a LOT longer for alcohol to burn off. Plus when you have the lid locked, there’s nowhere for that steam (which will have a trace of alcohol) to go.

So personally, I would only do this in a slow cooker if I was doing something like chili overnight for several hours and not using that much alcohol to begin with.

Can you use wine as a basting liquid?

Basting is when you pour a liquid over meat while it is cooking. So an example might be pouring small amounts of white wine, every 15 minutes, on a whole chicken you are roasting in the oven.

Since this is largely running off the food and into the pan, as long as you stop doing that for the last hour of cooking, you will be just fine.

And if you make a reduction sauce from the juices in the pan, it is probably best to not give that to your toddler. 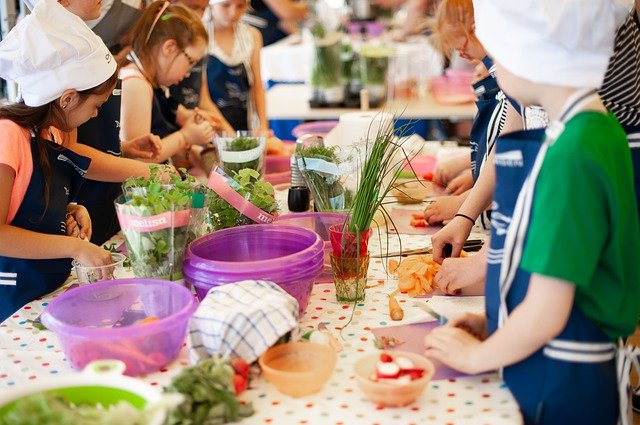 Is wine vinegar OK for toddlers?

Wine vinegar, such as white wine vinegar, has a little wine flavor, but if there are any traces of alcohol, they are so minimal that it will be just fine for toddlers.

Plus, due to the acidic nature of vinegar, you also aren’t likely using much, so there isn’t enough alcohol to do anything.

What are some good non-alcoholic substitutes?

If you just want to avoid any potential health problems but you still want something that provides the same function of wine in what you’re cooking, there are some things that can make a good substitute.

The easiest way to get that flavor would be to use a wine vinegar combined with broth (to even out the tartness).

But there is one other thing with tasty flavor that would be a good idea if you can find it.

It is called saba, or sometimes saba balsamic. It’s cooked grape juice but it (unlike wine) was never fermented. So it has that flavor but was never turned into wine or vinegar.

It’s a bit of a specialty food item so local grocery stores are unlikely to have it. However, there is this great one on Amazon I really like. So check that out and see what the current price is on Amazon.

The most common thing might be beer cheese soup or chili, both of which I have made and added beer to.

We know from the sections above that slow simmering of an alcohol in a larger pot of skillet produces the best results in terms of cooking off alcohol. Beer also only has 14 grams of alcohol per a 12 fluid ounce can or bottle.

Now, I fully admit I’ve given my young kids chili I’ve made with a can of beer in it. I’ve also used a little beer in some batters for deep frying too. And when I make risotto, I always use some wine in addition to chicken broth.

I was still operating then under the assumption that cooking removes the alcohol, which we now know as false.

And nothing bad happened (at least as far as the alcohol goes).

But for maximum safety for your kids, simmer food on the stovetop for at least 30 minutes if not 1 or more hours and use the least amount of alcohol possible for your recipe.

Can babies eat food with wine in it?

It’s best not to give babies or toddlers any food that’s been cooked with liquor. But generally speaking, beer or wine can be ok. But again, the cooking method varies greatly in terms of how much less alcohol remains in the food when it’s time to eat.

The longer you cook food that you’ve added alcohol to, the lower the percentage of alcohol remaining when you serve it.

As an example, soups, or sauces with wine or beer for simmered for 90 minutes or more will see most of the alcohol cooked off.

A small amount of alcohol may still be present, but it’s likely going to be well under the .5% classification for non-alcoholic. The higher the burner on your simmer, the faster the alcohol will evaporate.

Whatever alcohol that’s still present is not likely to cause harm to anyone, including babies. But of course, if you want to be 100% sure, avoid giving babies or toddlers anything cooked with alcohol.

But I’ve followed those steps with my 3 kids without any issues whatsoever.

However, it’s worth pointing out that if you add alcohol later in the cooking process a much higher amount of alcohol will remain in the finished dish.

That’s especially true if you just add the alcohol to hot food or liquid and then remove it from the heat. And it’s even truer for a hot dish where you are flambéeing or lighting the alcohol on fire.

While that might look like it’s literally burning up the alcohol, your finished dish might actually have up to 75% of the alcohol still in the dish. 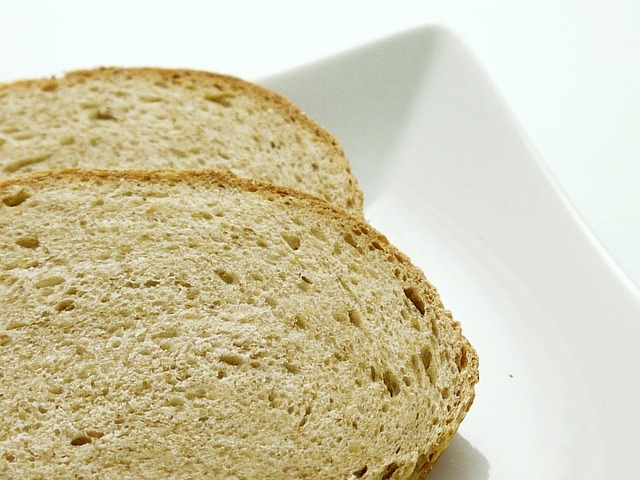 Is beer bread OK for kids?

Yes is the short answer.

Most types of beer bread will see alcohol content of at or well below .5% alcohol remaining in the final product, which classifies as non-alcoholic.

But that being said, if you want to err on the side of no alcohol whatsoever, you can make beer bread with any carbonated beverage, apple juice, or flavored water.

Also, bear in mind that your average beer bread recipe would likely make up to 8 servings with only 1 beer. So not only will most of the alcohol evaporate during the 1-hour baking process, but divided across 8 servings, it would still be a small amount of alcohol.

So for me and my family, I’m not worried about giving my toddler or older daughters beer bread.

In this article, we took a look at cooking with alcohol and serving that food to kids.

After all, while alcohol in recipes can make for some yummy food, no parent wants to accidentally give alcohol to their child.

So we looked at whether the alcohol truly cooks off, and if so, how long and how high of a temperature that takes.

Ultimately, we answered the question of can toddlers eat food cooked in wine with the answer of yes.

I have a toddler who's 3 and she loves the Disney movies we've shown her. But since I know some are scarier than others, I've wondered which Disney movies are best for toddlers? I decided to...

My 2 oldest daughters are only 15 months apart, so my wife and I had a lot of challenges figuring out how to parent a toddler and a newborn at the same time. Here's what we learned while doing...