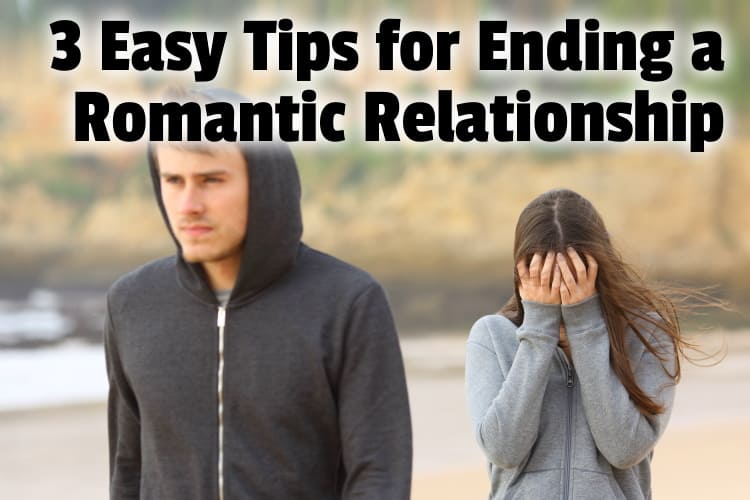 Almost all of us have one or more failed relationships behind us. Ending a bad relationship is never easy, and so many people procrastinate and put it off, which only makes things worse. Here are my 3 easy tips for ending a romantic relationship:

But those are just a few tips on how to do it, and hardly the only tips.

So in this article, we’ll not only dive deeper into each of those 3, but we’ll answer all of the top questions that naturally come up around this topic.

That way you’ve got all the information you need to end a bad relationship the right way, and in a way that doesn’t make you look like a jerk.

How do you end a relationship easily?

End a relationship easily by being to the point, avoiding accusatory statements which will cause defensiveness and likely make the conversation take longer than necessary, but also by being as kind as possible.

In short, follow the golden rule; treat others as you want to be treated.

Don’t drag it out if you have no intention of changing your mind. Don’t blame them or shirk all responsibility. Do share your feelings enough so they have a clear understanding of what’s happening.

But then end it, and move on, and avoid the urge to call or text them when you later feel doubt, remorse, guilt, or lonliness. You will feel some or all of those things.

But the only thing worse than a breakup is doing it again a 2nd time.

Finally got my break up text…? pic.twitter.com/FRoXEcfjAv

Is it bad to end a relationship over text?

Ending a relationship over text is bad, even if the relationship was brief. Always breakup in person, and if that is not possible, at least do it over the phone.

This person took the time to engage with you, get to know you and chose to spend their time with you. So unless they were abusive or unfaithful, they are deserving of your respect; even when ending the relationship.

So take the time and the trouble to end the relationship in person.

This isn’t always the easiest choice which is why so many people these days opt for things like texts or messenger to communicate a break-up.

But unless you’re in high school or middle school, that lack of maturity just isn’t acceptable.

I had two guys break up with me through text. I honestly don’t mind now I almost welcome it. It’s like cool, now time to move on. pic.twitter.com/xgjeY34bAT

Why do guys break up over text message?

Guys break up over text message when they lack the emotional maturity to have a direct conversation. A text breakup allows guys to avoid conflict, and avoid the guilt of seeing their partner hurt or angry given the impersonal; nature of texting.

But guys who are that immature, are immature about a lot of things.

So it shouldn’t be a surprise when they do this. You will likely have seen many other instances by the time it reaches this point that let you know this guy is an immature jerk.

And chances are, despite how attractive he may be, or how exciting it is to be around him, deep down inside, you know if he’s emotionally mature.

And if he’s not, and especially if he has a history of not treating others well, don’t be surprised when he treats you immaturely.

How do you know when it’s time to end a relationship?

It’s time to end a relationship when the negativity, drama, and arguments take up more time than the good times do. Additionally, it’s time to end things if the issues have previously been discussed without improvement, and especially if the couple has already engaged in therapy.

In other words, don’t just ship at the first sign of trouble.

But if you continually are seeing drama, fighting, and tears much more than spending time together enjoying one another’s company, it may be time to call it quits.

That’s even more true if you or your partner have brought up the issues previously in an attempt to resolve them. Every relationship will have stormy seas on occasion.

And no one should be dumped without warning.

So talk (constructively) about the problems you see. Seek out a couple’s counselor or therapist. Make an effort to fix things. But if you’ve done all that, and it’s still not working, there’s no benefit to either of you to keep dragging out the inevitable.

3 Easy Tips for Ending a Romantic Relationship the right way

Tip 1 – Explain how you feel

Potentially argumentative discussions can almost always be made better by both asking questions rather than making statements, but also by talking about how something makes us feel.

Say things like: “I feel like our relationship isn’t growing because we both want different things” or “we’re both at 2 different places in our lives and we seem to moving in opposite directions.”

It’s very unlikely they haven’t sensed there were problems.

And while they may not feel as strongly as you do, they probably can at least identify the issues. And it will probably come as some relief that you’re addressing those issues head-on in a mature way.

Sure, if they were abusive, or constantly cheating, that is obviously bad. But for most of us, both parties have likely contributed to the relationship’s downfall.

Sure, if you’re having a conversation to see whether or not you WANT to break up, it can be helpful for both people to get stuff off their chests in a constructive manner.

But once you’ve made the decision to end the relationship, there’s just no point in rehashing all the drama. Be kind, be clear, and don’t get ugly.

Tip 3 – Be clear about what you want

Dave Ramsey, renowned personal finance guru, likes to say “to be clear is to be kind”.

I actually think the quote originally comes from Brené Brown originally, but it’s so true. So often we beat around the bush, or are intentionally vague all while telling ourselves that we’re trying to spare the person’s feelings.

In truth, when we’re vague, unclear, or wishy-washy, it’s far from kind; especially given the high probability of our words being misinterpreted.

So don’t be brutal or uncaring, but do make your intentions crystal clear; “Our relationship is no longer working for me, and it’s time for us to end it”.

Yes, you can add more to the story, discuss, and get their input.

But if you’ve already made up your mind, there’s no point in taking an hour to get to the conclusion, as giving them false hope, or wasting a large amount of their time in the hopes of them convincing you not to break up is also unkind.


10 Signs You Need to Break Up

So in this article, we explored the unfortunate situation almost all adults have had to face at one point or another; breaking up with someone.

A breakup is never fun, even when it’s sorely needed or long overdue.

But done incorrectly, a breakup can have devastating long-term effects on both of you. But more importantly, doing it the wrong way, or taking the easy way out can make you look and feel like a bad person.

And that’s not only how they will see you, but all of your mutual friends as well.

So take the time, trouble, and maturity to do things the right way. You’ll sleep better at night knowing you were respectful, timely, and straightforward with how you communicated it.