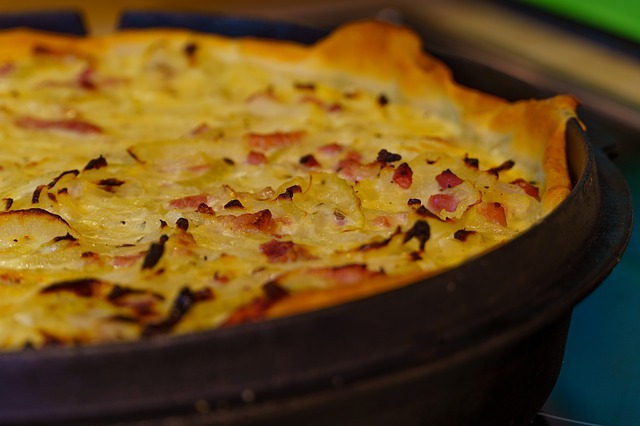 A Dutch Oven is effectively a cast iron pot that has a heavy lid. This effectively seals in heat and moisture, allowing you to cook a variety of foods to perfection. It’s worth noting that the lid can also be inverted. It won’t keep in as much moisture but it will give you an additional cooking surface.

There are a variety of Dutch Ovens available online but the best ones, such as this Crumble Dutch Oven, are made in unique sand moulds, ensuring your product is unique.

What may surprise you is the array of ways you can use your new Dutch oven.

You can bake almost anything in a Dutch oven as it works on the same principle as a standard oven. The difference is that it doesn’t have its own heat source. Whether you’re looking to bake scones, bread, cakes, or something else, your Dutch oven can handle it.

When it’s nearly finished cooking, remove the lid to get the perfect browning result.

A Dutch oven is perfect for making casseroles, stews, and even risottos. This is not the same as a slow cooker although the technique is similar. Simply prepare your food and place it in the Dutch oven, allowing it to simmer until it’s ready.

You can serve straight away

You can use a Dutch oven like a standard pan if you wish. Simply add the ingredients and the water and let it boil until the pasta, or another dish, is ready.

You can use a Dutch oven as a frying pan. It works with a drop of oil for shallow frying or half-filled with oil to be used as a deep fryer Just make sure the oil gets to temperature before you start putting food in.

Many people confuse a Dutch oven with a slow cooker, it is so much more! However, it can be used as a slow cooker and is very effective! Simply put your ingredients in and let them cook for the day.

Why You Need A Dutch Oven

The answer should already be obvious! The Dutch oven is very versatile and makes the cooking process easier. What more incentive do you need? After all, a good Dutch oven will make it possible to cook even after a long day at work, helping you to make healthier food choices.

Of course, you should also note that the Dutch oven is made of cast iron. It needs minimal cleaning and the cast iron helps add flavour to every dish. In fact, it can even add a little iron which is good for your body!

You’ll also find that this is the only pan you ever need! If you haven’t already invested in a Dutch oven, it’s time you did.