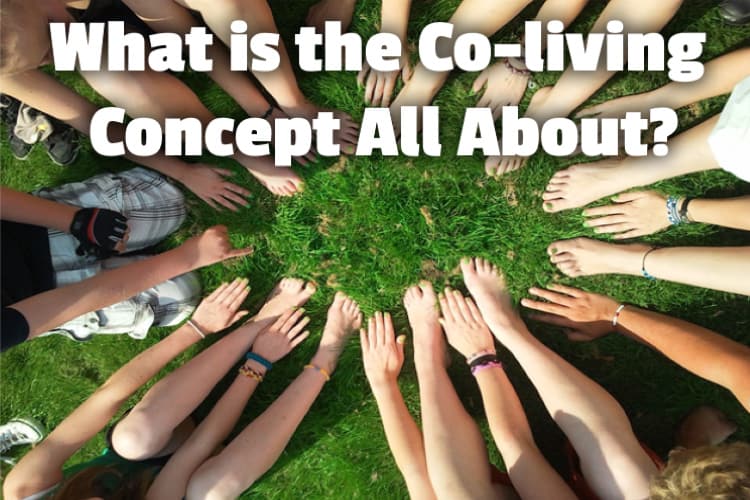 Chances are you’ve heard about co-living. But you may not fully understand what co-living is and what the co-living concept is all about.

I decided to learn more and here’s what I discovered:

Co-living is the modern-day, urban millennial version of the ’60s and 70’s hippie compounds. Typical co-living spaces include both private and common living areas, often with shared values among the residents. Costs and responsibilities get shared as well.

But that’s just the beginning of what the co-living movement is all about, so let’s keep going!

We’ve all seen or heard about those utopian hippie communes of the ’70s.

Everyone living together in peace and harmony, living off the land with little to no waste; everyone contributing equally and benefitting equally.

I think you’ll agree with me though, that for most of us, that’s simply not a realistic way to live. And some got downright cultish.

The co-living concept is the modern version of that. But it has a far more capitalistic model. Its concept relies heavily on a community mindset among its individuals.

In this post, we’re reviewing exactly what is co-living, how the co-living concept works, how much it costs and how it can change your life. Simply put, common living, more often referred to as co-living, is the term used to define a group of people who live together to optimize the use of shared resources.

Unlike communes or hippie cults which were often rural, co-living spaces are typically urban.

But like those things, the age range that co-living appeals to tend to be those in their 20’s and early 30’s much more than parents with kids or boomers.

Neither a traditional hotel nor a hostel, the co-living concept has been made trendy by startups and freelance workaholics. They saw the value in creating collaborative spaces that cut costs by pooling resources.

You’d be forgiven in thinking these so-called “hacker houses” primarily housed IT geeks and millennials, but you’d also be mistaken.

The co-living concept of a built-in network of similar community-minded people has appealed to professionals, singles, and even families of all ages and walks of life.

If saving money isn’t motivation enough, the shared intention of sustainable living and lowering environmental impact is becoming more and more poignant as time goes by.

By allocating fully equipped working and eating spaces, co-living spaces allow their residents to channel their energy into their work while the finer details are taken care of. And it’s all under one convenient price tag.

The cost-saving benefits are a major pull for many students, professionals, travelers alike.

But the benefits extend beyond much further than the bottom line. Co-living provides relief to the high cost of housing and overpopulation that many urban centers are experiencing around the world.

How does co-living work?

Co-living splits expenses on shared resources such as amenities, utilities, skills, and even vehicles. All members benefit by not only paying less but through optimizing assets and cutting back on waste.

So in a way, it’s similar to when I lived in a loft with many other units and we had an HOA manage the common areas for us.

But co-living takes that to the next level!

Many co-living spaces even include carpools, community gardens, and feeding schemes which enrich the communities in which they are based.

This further cements the community mindset on which the co-living model has its foundation.

Unlike apartments and condos that can be pretty impersonal and only take care of basic common areas, co-living spaces typically give residents a mix of private and shared spaces.

For instance, many facilities provide private bedrooms but shared (and furnished) living & meal spaces. So unlike a condo, while there is a privacy trade-off, co-living spaces provide residents with a lot of amenities.

While there definitely can be a “college dorm” feel, this comes with the maturity that comes with being a little older. Plus, many co-living spaces are built around a series of shared values. So you may find you have a lot in common with your neighbors.

Often cleaning services are provided in addition to things like toilet paper and kitchen goods.

But ultimately, co-living is for someone willing to compromise a little bit on privacy for th3e sake of community with like-minded individuals and shared costs (and significant cost savings).

What are the costs involved with co-living?

If it’s all about the bottom line for you, the co-living concept has a lot of obvious advantages over other housing or short-term accommodation alternatives.

The idea is fairly straightforward. The more members there are in the community contributing toward the rent, the utilities, the furniture, the entertainment, the groceries, and the like, the lower the costs become for everyone involved.

Savvy entrepreneurs have seen the benefit of this.

They create apartment blocks aimed at providing everything their residents could need in one convenient fee. This allows them the freedom to focus their attention on experiencing their city and enjoying its community to their fullest.

Many singles have surveyed the housing market and understand how expensive (and small) many apartments are. So, co-living spaces allow them to enjoy the luxuries that they wouldn’t ordinarily be able to afford on their own.

Yes, is the short answer.

Unlike a group like the People’s Temple cult, co-living spaces aren’t led by 1 person who has the potential to grow and abuse their power.

Instead, co-living spaces are organized and managed by a company that cares about its reputation and growth. As such, they tend to be very safe. Much safer, in fact, than a lot of metropolitan cities.

Many offer round the clock security guards and use the latest technology to ensure only members get access to the space.

Of course, any time you have large groups of people under 1 roof, you run the risk of personality clashes and other issues. But unless you are isolated on a large piece of land that is heavily protected, you’re running those risks daily anyway. Not everybody chooses the co-living concept solely to save money.

The trend is growing because it answers several pain points that modern city dwellers are experiencing.

IKEA partnered up with a NY firm -Anton & Irene- and SPACE10. They surveyed more than 7,000 people from around the world.

The aim was to find out how living arrangements would be in 2030 if it were totally up to the people they surveyed.

Several key takeaways were revealed in the report. They shine an interesting light on how people envision ideal living spaces in their future;

The Inspiring Truth About Housing in 2030

What did we learn from the IKEA survey?

We learned what housing is likely to look like in 2030. More importantly, we learned that the co-living concept could be perfect for people who are:

Co-living can open up a whole new world to you.

Additional Benefits of the Co-living Concept

Co-living is more than a cost-cutting, environmentally friendly solution to the housing crisis.

It also has massive appeal to IT techs and other industry professionals. The tech world has long embraced shared workspaces and co-working arrangements, so it’s a concept that is not new to this community.

Sharing office spaces with other IT professionals, while removing the stress of long commutes, has been proven to improve productivity.

What is Co Living for Remote Working - A tour inside Sun and Co, Spain's world famous coliving Space

Did we answer your questions about the co-living concept?

In this post, we reviewed the nuts and bolts of what is co-living.

We looked at the upsides and downsides as well as the costs involved. The co-living concept isn’t for everyone, but it is growing in popularity. By 2030 it could easily be the norm in urban settings, for IT professionals and many other groups.

Any tips, suggestions or questions?

Want to write for Middle Class Dad too? Check out everything you need to know on my Guest Blog Page.