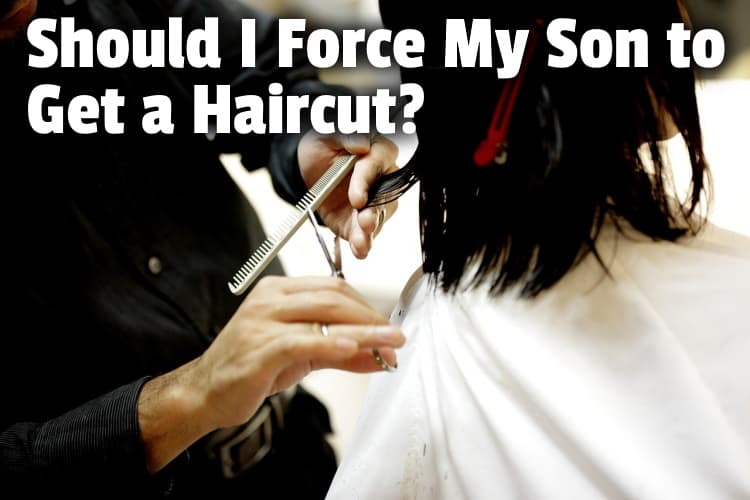 It’s not unusual for parents and kids to have disagreements over clothing and appearances. So what do you do when your young son doesn’t want to get his hair cut? Have you asked, “Should I force my son to get a haircut?”

Here’s what I’ve learned as a parent:

Do not force your child to get a haircut. Parents must determine what’s really important in the family and be 100% consistent with those rules and values. And while rules concerning safety should never be broken or negotiated, parents should choose their battles on less important issues.

But that’s not all there is to talk about.

In this post, we’ll discuss reasons why your son may not want to get his haircut and why forcing him to do so could be detrimental.

After all, you may be thinking about it from not wanting him to get teased or called a girl. And he may not yet be aware of bullying. So it’s natural to want to protect him.

But is this the time to make a hard stand?

My son getting a haircut and it’s not even done but he look handsome already 😍 pic.twitter.com/lvHFTMEMRT

How do I convince my son to get a haircut?

For children age 5 and older, explain the “why” behind the desire for him to get a haircut. Parents who make demands without a clear explanation behind them get more pushback. But after letting him know the pros and cons, allow him to make the decision and at least be prepared to compromise.

Of course, that works better with a 6-year-old than it does with a 3-year-old.

As parents, we certainly have the right to enforce rules and values in our homes. But you should also pick your battles. Is a haircut really a cause for concern?

Parents should be more flexible when it comes to things like hair and personal style. Arguing about these things will almost always result in a power struggle.

Young kids may just need a change in terminology.

Use “trim” instead of “cut.” The word “cut” is often associated with an injury or something that happens in the kitchen. “Trim” can make it sound more friendly. Choose a kid-friendly stylist and make it fun.

Teens still need the support and guidance of their parents.

But they are also in a stage where they are trying to figure out who they are. As long as their style isn’t rude, suggestive, or violent, let them experiment with their identity.

This is a good example of the authoritative parenting style. It’s a style of parenting that sets clear goals and boundaries but also allows for a certain amount of freedom.

To read about this style of parenting, as well as others that are preferred by child psychologists, check out this recent article.

5. My son, Luke, finally getting the haircut I’ve been trying to convince him to get for months. 💇‍♂️💈 Huzzah! pic.twitter.com/HJKpy2jqdk

Why does my son hate having his hair cut?

Little kids often have a lot of anxiety around haircuts. They don’t know what to expect, and there are loud noises and strangers in their faces.

If your kid is afraid of getting his hair cut, try using different terms.

By simply saying he needs a “trim” instead of a “cut”, you’re making it sound less scary. “Cut” is usually associated with pain. “Trim” hasn’t been associated with anything, so it’s not scary.

It could also be that he just doesn’t like the process. He doesn’t like sitting still in the chair, getting hair in his face and on his clothes. Maybe it’s too noisy, or there are other sensory issues happening for him.

Be sure to choose a kid-friendly hairdresser.

There are several chain stores that are kid-friendly and just plain fun. They may have really cool chairs that kids can sit in or TVs where they play cartoons. Some even give treats when the cut is over.

You could even let your son bring a friend along. Everything is better with friends!

Older kids may be struggling with anxiety. School is harder, friendships are more complicated, and it’s more important than ever to be stylish.

He could simply be trying to fit in with his friends.

Kids will often encounter some type of anxiety in their lives. Sometimes it’s not very serious, but sometimes it can be a true anxiety disorder.

To read more about anxiety in teens, read this recent article. The article is geared towards teens, but it applies to older elementary-age children too.

What really surprised me was how quickly a minor form of anxiety could shift to a full-blown panic attack when parents make 1 simple mistake.

My Son getting a haircut at my childhood barbershop. pic.twitter.com/vymEN99zeW

How often should a toddler boy get a haircut?

Toddler boys not intentionally growing their hair long will need a haircut every 4-6 weeks. Longer hair can be cut 2-3 times per year.

The nice thing about long hair is that you can wait longer in between trims. Longer hair is easier to trim at home. It’s more forgiving than shorter hair and doesn’t show mistakes as easily.

The age for your son’s first cut will depend entirely on their hair. Some babies are bald bundles of joy for quite some time. Others are born with luscious locks that need to be cut sooner rather than later.

First cuts may need to happen as soon as a few months or as old as two years.

Many parents choose to make the first haircut something to celebrate. Turning it into a celebration could make the process of getting a haircut much less stressful for both you and your son.

If you’re worried about your son’s confidence, consider putting him in an after-school program that encourages kids to work through challenging situations.

To read more about confidence-building activities for kids, read this recent article. These can be martial arts, team sports, dance, theatre, or other things.

The most important thing to look for is a teacher or coach who inspires and motivates your child. But there’s one thing that’s crucial to avoid.

My home state of California is currently a joyless police state, so my family and I came to Florida for the week. My son is getting a haircut without a mask on, and I am getting a beard trim, two activities outlawed in California for over 8 months. pic.twitter.com/bDjFVLYBoS

Why won’t my teenage son get a haircut?

Teenage sons may avoid getting a haircut as part of being a teen is trying new things and doing the opposite of what parents want. This is a right of passage. It’s also how children figure out who they are and what they’re capable of.

Your son is his own person, with his own ideas and opinions. He is figuring out his identity, including his likes and dislikes about his personal appearance.

This is a normal phase in life. Fighting about it could cause resentment and really damage the relationship.

At this point, he’s probably letting his hair grow to fit in with his friends. He’s showing the world that he gets to make the choices in his life and that he doesn’t have to conform if he doesn’t want to.

Even if you hate his hair, remember that this is just a phase. It shall pass. It’s just hair. Eventually, he will either get it cut or he won’t. I’m willing to bet you’ve had a less than flattering hairstyle at one point in your life. You and your parents made it through.

You will make it through, too.

As he grows, he will have to learn how to make good choices as he is faced with all kinds of decisions. He will encounter more serious issues where he will need your input and guidance.

If you trust him with the little decisions, he’ll be more likely to come to you with the larger, more important decisions.

My son getting his 1st haircut from an outsider in 6 months. Mighty impressed with the safety protocol and attention to detail! Take a bow @urbancompany_UC @abhirajbhal 🙌🏼 pic.twitter.com/k9lKLeIEQT

Is it cool for boys to have long hair?

Long hair is always in style for boys. It’s versatile, low maintenance, and allows them to show off their personalities. It does, however, sometimes lend itself to being picked on, called a girl, or mistaken for a girl.

It can also lead to lice much more often.

It doesn’t matter how old your son is or the texture of his hair. Wavy hair, straight hair, thick or curly hair can all look great long. Most styles have an edgy, street-cool vibe. They have great texture and movement.

They embrace the messier side of boys without actually being messy or dirty.

Many long styles are inspired by the latest celebrity trends. Some are classic cuts that are still cool and stylish. Long hair on boys is a trend that will never fade, so you might as well embrace it.

Did I answer everything you wanted to know about whether you should force your son to get a haircut?

In the grand scheme of things, haircuts really aren’t that big of a deal.

In fact, it’s a great time to let your son have some control with zero risks to his health and safety. Consistency, boundaries, and rules are always important when raising kids.

But it’s also important to support your kids and let them have the freedom to make decisions in their lives.

My wife and I have 3 daughters and one of the things that helped our parenting was to seek out authoritative parenting examples. Here are some of the best ones we found: Some Authoritative...

Parents know the struggles of finding effective parenting tips that actually work!  We parents are stretched thin. Our patience and energy get dispersed over a wide array of tasks. Home,...