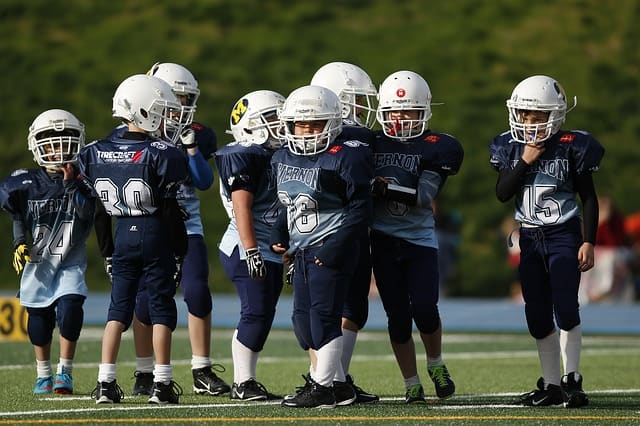 Encouraging your kids to participate in sports has loads of benefits. It’s the perfect way to bond doing a shared passion. And the benefits of physical activity for your children are numerous – both physically and mentally. Plus, they might find out they’re pretty good at it too. How many of us dreamt of becoming the next Michael Jordan or David Beckham?

While as parents, we want to encourage the apples of our eye to pursue their dreams, it can be a worry. Will a career in sport actually be able to support them financially? Thankfully, there’s no need to worry! Pursuing a career in some sports is well worth the hard work. And they don’t even have to hit the big leagues to live comfortably. Even minor leagues can support a balanced lifestyle – and leave plenty of room to develop a long-term career.

Here are 5 of the best paying sports careers that your kids could earn a sweet living from.

You probably don’t need to be told, but professional basketball players are the highest-paid athletes in sports. To be an exceptional player, your kid will need the best basketball shoes out there. Having the right pair will prevent foot and ankle injuries, as well provide the confidence needed to jump, run, and perform optimally. NBA players are looking to earn an average salary of $7,916,644 in the 2020-21 season. Because NBA rosters have fewer players than baseball or soccer, they get more resources devoted to them. Even if your kid is the lowest-paid player in basketball, they’d still earn a whopping 1.6 million.

Plus, they’re in the right country to earn the big bucks. American players get paid much higher salaries than their European counterparts. But be forewarned, basketball is one of the most challenging sports to go pro. With only 1-3% of kids who play competitive high school Basketball making it to the NBA.

A real home-grown game that every kid is encouraged to give a go at least once. The participants of Major League Baseball are viewed as some of the highest-earning athletes in the world. The 2019 world series MVP, Stephen Strasburg, had 2020 earnings of $19 million. MLB players averaged a yearly wage of $4.52 million back in 2018 – so you don’t have to be MVP to get a nice paycheck.

Even in the minor leagues, your children could still earn between $1,000 and $3,000 per month. That’s not a wage to sniff at if they’re doing something they love. Even if they get drafted from college or high school as one of the top 100 players, they will get a nice bonus of up to 2 million dollars. There’s stiff competition though, going pro requires dedication and a lot of hard work.

Pro hockey players are put through the wringer. It’s just one of those sports that are really physically taxing. The physicality of the sport means you’d have to expect a fair few injuries. There’s a reason hockey players wear so much gear!

An average salary for NHL players is between $2.3 million and $3.6 million. Minor league players take home anything from $40,000 to $90,00 per year (depending on the minor league level they’re playing in).

Your kid will have to stay in tip-top physical shape, though, to take on the physically demanding games and season schedule. Like and pro sport, there’s no quick way to go professional. But if your little one has the passion, they’ll relish every last minute of the journey.

Having a career in sport isn’t restricted to being a professional player.

If your kid hasn’t entirely made it to the major leagues of their dream sport, coaching could be for them. While salaries vary hugely between the level of competition and the sport, they command respected no matter where they end up. The motivation a player receives from their coach can give them the extra push they’ve been waiting for.

Your kid could be helping to shape the careers of future sporting legends. And if they’re a college coach – they could pluck the next Le Bron James from high school prospects.

Make it to top pro coach status, and you’d be welcoming more than 5 million dollars into your bank account. Even college coaches can earn a reasonable $65,000 on average. It’s a great career choice to push your kids towards if their pro athlete dreams don’t come to fruition.

Again, if your child’s dream of being a top athlete didn’t quite work out, there are plenty of other ways to be part of the industry. Umpires and referees get to be center-stage of all the game action.

It’s the perfect career for someone who has a past in sport because it requires more physical fitness than you’d think! Someone has to keep up with the players and keep them in check.

Umpires and referees are hugely respected in the industry because they know the ins-and-outs of the game. And their pay pack isn’t half bad either. If your kid can make it to the NBA, then they’d be looking at $150,000 to $550,000 a year. If they stick to lower leagues or the college circuit, an average salary of $40,000 will drop into their bank.

Even that’s not bad for your kid being able to work in an industry they love. How many people get to say they actually like their job? Let alone love it!

All of this info makes you think. How can I support my child no matter what?

How can we engage with them to help pursue their dreams? None of us wants to become that parent who lives vicariously through our kids. It’s bad enough watching them on Dance Moms, let alone becoming one.

So here’s just a little list of things to keep in mind if your child really does want to go pro in the sport. Because it’s all about them, not us.

Even if you’re children aren’t exceptionally talented at a particular sport, participating should still be encouraged. Check out these tips to get your kids involved, and excited about, physical activity.