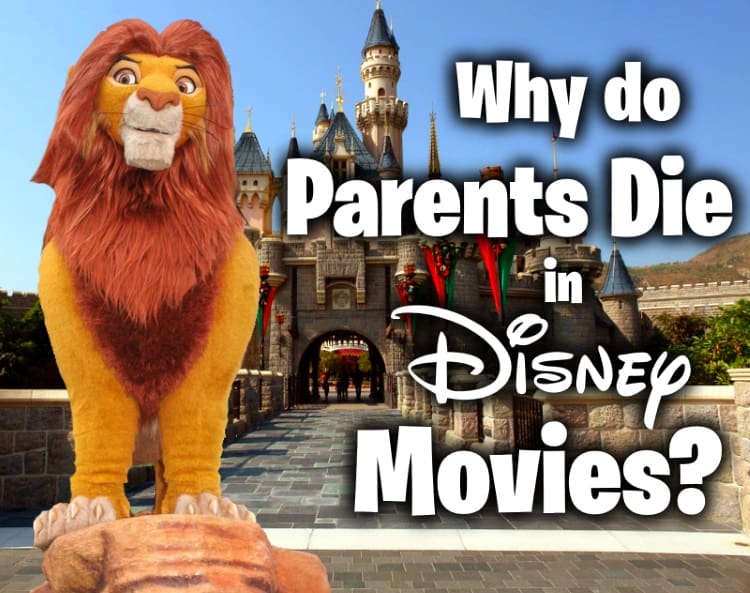 I LOVE all things Disney. And while my family and I have sometimes joked about the parents often dying in Disney films, I began to wonder, in all seriousness, why do parents die in Disney movies?

So I decided to look into it and here’s what I discovered:

Walt Disney either created or was drawn to stories where 1 or both parents die due to the death of Disney’s mother when Walt was 36. Walt felt personally responsible for his mother’s death, and that impacted the direction the Walt Disney Company has taken with its films ever since.

But there’s a lot more to know about which Disney movies have tragic deaths for parents, and what some of the exceptions are, including the tragic circumstances of Walt’s mother’s death, which we get into below.

Walt Life is an exclusive Disney fan club created for hardcore fans just like you and me.

The Walt Life Fan Club builds magical subscription boxes, and delivers them to your doorstep every month! And you can start building your own custom box today with only the official Disney items you want.

Learn more at Walt Life (click to go to their site to learn more)!

#Fact Think of any @Disney films where no parent(s) and/or the main character(s) die?!?… In the majority, they all die… sad but true?!

How many Disney movies have parents who died?

There are at least 16 well-known Disney movies where 1 or both parents die either during the movie or prior to the story’s beginning.

But to be fair to Disney, not all the Disney movies are created solely by Disney. In fact, many are based on fables, fairy tales, or classic stories.

Here are just a few examples of films made by Disney where a parent dies where the actual stories were written by someone else (long before the Disney films):

But those films aside, here are the best known Disney films where one or both parents die or are dead at the start of the film:

Honestly, there’s probably more, but those are certainly the best-known Disney films with one or both parents dead.

If you ever head to Walt Disney World, don’t be thrown off by Hollywood Studio’s reputation for being the least fun of the 4 parks.

Honestly, it’s crazy that Hollywood Studios gets fewer people than the other parks, so if you want to see some shorter lines, check out What to do at Hollywood Studios (click to see my article now), home of Toy Story Land and the soon-to-open Star Wars Land (called Star Wars: Galaxy’s Edge).

– Maurice is one of the few Disney parents who doesn’t die and he would do anything for his daughter
– He was determined to rescue her from the Beast in any way
– Absolutely love the live action version bringing more depth to the bond pic.twitter.com/nwiBRENa3Y

Do any Disney movies have both parents?

Yes. There are at least 7 Disney movies where both parents of the main character are alive.

Tangled, the story of Rapunzel features both her mother and father. Where the parental tragedy happens in this story, however, is with the would-be adoptive Mom, Mother Gothel.

Mother Gothel, who stole Rapunzel from her parents as a baby, you guessed it (spoiler alert) dies in the end.

But Tangled is far from the only Disney film featuring both parents.

Make sure to check out all my personal Disney recommendations (click to go to my page) on saving money on hotel, rental cars, airfare, park tickets, and even saving money on costumes and toys!

Dumbo’s Mom died of dementia according to nhs reports…may bad karam fall all who use the LCP #tmommfilm pic.twitter.com/wLH9aZBQlL

Do they kill Dumbo’s mom?

Dumbo’s mom is not killed in the Disney film Dumbo. She is, however, imprisoned early on in the film, and rarely seen until the end of the film.

She’s caged after fighting back when other circus animals are picking on Dumbo because of his giant ears.

Dumbo gets to visit her in the film. But they can only touch trunks and she isn’t fully visible due to the confines of her cage.

She remains in the circus jail for much of the film but reappears at the end of the film.

Eventually, the circus master figures out Dumbo can fly. And no doubt he figures he can make a lot of money off Dumbo’s unique talent. So he lets mom out of her cage and she gets reunited with Dumbo.

In fact, they even get their own private train car on the circus train.

If you plan to visit Walt Disney World in Orlando, you definitely will want to know all the tips, tricks, and Disney World FastPass+ secrets (click to read my article and bookmark)

My most popular Disney post gets upwards of 10,000 readers a month. I also update it all the time as new information comes out (hello Star Wars: Galaxy’s Edge!).

So definitely take a moment and check it out, bookmark it or pin it so you have all the tips for your next visit.

Um… Did we ever find out what happened to Mowgli’s parents in #TheJungleBook? http://t.co/t3TYbZJ3it pic.twitter.com/PBcl3Dx8RF

Mowgli’s parents were separated from Mowgli during a tiger attack, and are presumed dead in the original Rudyard Kipling novel. But their fate is unclear in the 1967 Disney film. In the 2016 film, however, the story was changed to where Shere Khan, the main tiger in the story, killed Mowgli’s father.

Bear in mind that this story too is NOT an original Disney story.

The Jungle Book film is based on the book of the same name by author Rudyard Kipling (who also wrote a sequel novel in 1894). And the original book itself was actually a collection of Kipling’s short stories which were first published in magazines.

In the film, as in the book, Mowgli is found orphaned in the jungle in a basket, presumably abandoned intentionally. He is then raised by wolves, although in the best-known version, Disney’s 1967’s animated classic, he spends the majority of the film with his pal Baloo the bear.

The original Kipling stories flesh out his origin a bit more by saying that he was lost in the jungles in India during a tiger attack.

So presumably Mowgli’s parents were killed by tigers.

Every Disney park is different in terms of the size and how long it takes to enjoy.

Want to know Which Disney Park is the Biggest? I break down every Disney park on the planet in that post, so just click the link to read it on my site.

While everyone knows Disney World is the largest park, I was surprised to see just how much bigger Star Wars: Galaxy’s Edge was at Disney World compared to Disneyland.

#OnThisDay in 1901, Walt Disney was born in Chicago. Disney’s father was a carpenter, and his parents moved to Chicago for the construction of the World’s Columbian Exposition. His father built their home in the Hermosa neighborhood in 1893, and it is still there today. pic.twitter.com/uA1Fb01tSq

How did Walt Disney’s parents die?

Walt was born in 1901 in Chicago where he lived with his parents and 3 brothers and 1 sister. Disney’s parents were Elias and Flora Disney.

How his mother died really is the key to why parental death plays such a large role in most Disney movies.

After Walt’s success with Snow White in 1937, Walt, along with his brother Roy, bought his parents a home in Hollywood. The home was close to the Disney studios in Burbank.

Within a month of moving in, Flora complained to Walt she was having issues with the gas furnace.  Repair people came out, but apparently did not adequately fix the issue as a few days later a housekeeper found both Flora and Elias unconscious inside the house.

The housekeeper managed to pull them to the front lawn of the house, but while Elias did recover in the hospital, Walt’s mother Flora was pronounced dead.

Flora died of asphyxiation from the gas leak.

Because Walt had bought her the home and it was Disney repair people who had poorly attempted to fix the problem, Walt felt complete responsibility for his mother’s death.

Disney never spoke of the incident or his mother’s death, but there’s no denying its lasting impact on his films and his directives for the studio after his passing.

Walt’s father passed away from natural causes, but no doubt impacted by his wife’s death almost 3 years earlier. Elias was 82 when he died.

Did I cover all you wanted to know about Disney movies and why one or both parents almost always seem to die?

In this article, we took a quick look at something that people have snickered about for years; Disney movies and parents dying.

After all, whether we’re talking Frozen, The Lion King, The Little Mermaid, Aladin, Beauty, and the Beast, or a host of others, there’s no denying that Disney loves a good tragedy to set up their films.

So here, we examined that trend and explored some of the reasons behind the death, including the real tragedy that befell Walt Disney’s own parents.

link to 29 Best Ways to Revive Your Marriage

All marriages have ups and downs. But sometimes if we let a downturn go on too long without addressing it, it can lead to an unhappy marriage and is beyond saving. I used to wonder "how can I revive...

In 2013, I cheated on my wife. It's not my proudest moment, and as you can imagine, it took a while for my wife to trust me again. Here's what I learned about how to regain my wife's trust: ...