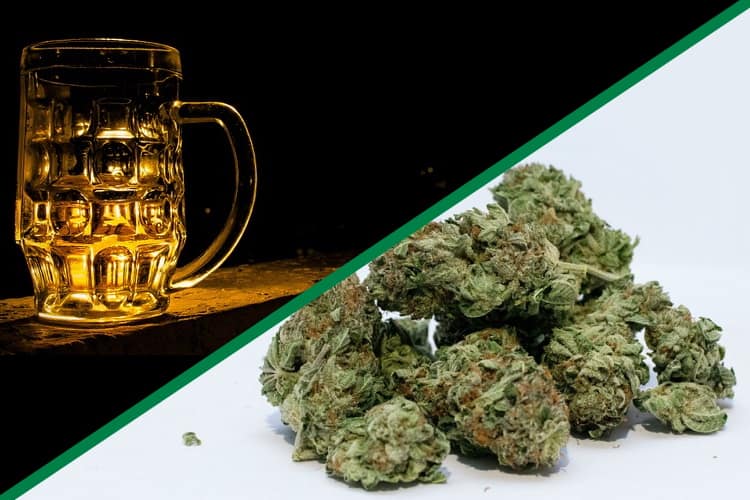 Trying to decide which is better or which is worse for you is an argument that has been going around for a long time. There has been plenty of research carried out, especially over the past couple of decades, which shows weed has far fewer risks in comparison to alcohol. These days, with some states in America, the whole of Canada, and many countries around the globe legalizing marijuana, there is very little difference purchasing pot compared to buying alcohol. In fact, in some areas, it’s easier to buy marijuana because dispensaries are often open 24 hours a day 7 days a week while most shops are only allowed to sell alcohol at certain times of the day.

However, we have managed to combine some of the basic effects and issues with both substances to see how they compare with each other.

Before we get started, please keep in mind that both booze and cannabis react differently from person to person. Just because one person has a tolerance for marijuana, doesn’t mean they can drink a copious amount of alcohol and vice versa. Plus, both substances can affect a person differently.

Some people might find after smoking a certain strain that they feel tired while others might feel wide awake and full of energy.

When you mix both alcohol and cannabis together, it can cause a completely different experience. Most people find it difficult to function properly after mixing the substances, so make sure you avoid operating a vehicle when under the influence.

What are the Short-Term Effects of Alcohol?

Not everybody reacts the same when they are intoxicated from drinking alcohol. One person might feel happy and have a good time, while others feel restless. Here are few other common effects brought on by alcohol.

The most talked about short-term effect of drinking alcohol is the hangover the following day after a night out. This can make someone feel terrible, and they might experience headaches and diarrhea. To reduce the hangover, experts advise us to drink plenty of water so that we are not dehydrated the following day.

As discussed earlier, cannabis affects everyone differently. Here are a few of the most common effects to the substance:

Although people don’t talk about weed hangovers in the same way they speak about hangovers from alcohol, they do exist although they are no way as intense. Some people experience headaches after a night consuming pot, while others feel like they have brain fog, and struggle to function.

Drinking alcohol consistently for many years can be detrimental to a person’s health. Here are a few of the issues that people have who drink too much booze:

There has been a lot more research over the years with alcohol, so a lot of the long-term effects on cannabis products are unclear. However, here are a few of the general long terms effects known at present:

One of the reasons that long-term effects are difficult to follow up with when it comes to cannabis is because weed is a lot more potent these days.

If you want to purchase cannabis that is not too strong, just ask a budtender working in a pot shop for cannabis with a low amount of THC.

Although alcohol seems to be much more dangerous than weed, keep in mind the cannabis is not entirely safe either.

Both alcoholism and drug addiction are major issues most societies face on a daily basis around the planet, but if consumed responsibly, both substances can be enjoyable.