It can happen in almost any relationship. You reach a point where the sex just drops off to nothing. If that’s where your relationship is, you may have wondered is it ok to cheat if you are in a sexless relationship?

I decided to really take a look at the question and here’s what I found out:

No. There is no justification for cheating, even if the spouse is intentionally withholding sex for a long period of time. An affair could potentially destroy your relationship and if you have children, it will damage them for years to come. But even an undiscovered affair will leave the cheater riddled with guilt.

But there’s a lot more to say about affairs, sexless marriages, and whether or not an affair will destroy your marriage.

So let’s look at some follow-up questions everyone trapped in a sexless marriage might have.

You CAN save your marriage — even if your spouse is distant and unaffectionate.

If you feel like your marriage is worth rekindling, then do yourself a favor and check out all the info and free video at Mend the Marriage. The marriage you save may be your own!

Is it ok to have an affair if you are in a sexless marriage?

There is no justification for cheating, ever. I say that, not proudly, as someone who did cheat on my wife back in early 2013.

I was also cheated on in a previous relationship. So I’m in the unique position of understanding both sides of the coin.

People who do use a sexless marriage as justification for cheating often point to the spouse withholding sex as being equally guilty of harming the marriage.

I’m not sure I completely disagree.  Intentionally withholding sex for an extended period of time is an incredibly damaging thing to do to the person you supposedly love the most.

But as I look back to the time I cheated on my wife in 2013, I told myself a number of reasons and excuses why what I was doing was OK.

But in the end, I had to admit that there was nothing my wife was doing or not doing that justified it. My actions were a complete betrayal of our marriage vows. It destroyed her trust and faith in me. It also could have potentially irreparably damaged our family.

In short, as the saying goes, two wrongs don’t make a right.

Whatever the issues in your marriage, cheating is not the answer. Remaining in a sexless marriage isn’t the answer either. So as we go further into this article, we’ll explore the solutions to that.

One thing my wife and I did in 2013 after deciding to stay together after my affair, was dedicating ourselves to rekindling our marriage. That came right on the heels of my wife saying something devastating.

She said while she still loved me, she wasn’t sure she was still in love with me.

I wrote about everything we did to turn our marriage around in this article which includes the 1 thing that really made a bigger difference than anything else.

Can a sexless marriage survive?

Unfortunately, the odds are not great for a sexless marriage to make it in the long run.

Recent data tells us that 15% of all marriages are sexless. By “sexless” I mean couples that haven’t had sex in at least 6 months and don’t have sex more than twice a year).

Having been married twice and in serious long-term relationships an additional 2 times, I can tell you that it’s normal for the frequency of sex to ebb and flow.

Life happens, careers grow, stress increases, and if you add kids to the mix, that creates a whole other scenario for cutting into our sex life.

If you then add on top of all that any underlying childhood issues tied to trauma, neglect, or abuse, then those things will make your sex problems even worse. Ironically, for those who suffered abuse as a child (physical or emotional), the sex drive often decreases as a relationship gets more serious.

But if you’re wondering specifically as to what the odds of a sexless marriage surviving, I recently wrote an article which dives into that fully, including the surprising statistics for that leading to divorce.

So just click that link to read it on my site. 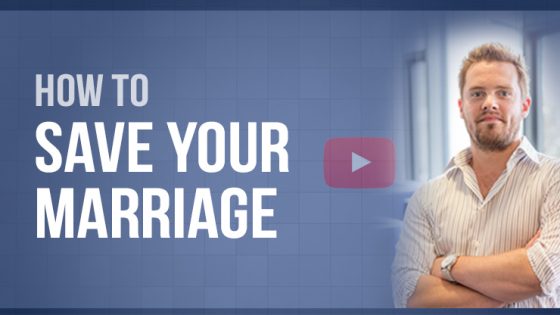 How to survive a sexless marriage without cheating

Cheating is a choice. And luckily for us higher-brained primates, we can make a different choice any time we want to.

If you’re thinking about cheating because you’re in a sexless relationship you have 2 problems that need to be dealt with:

With not cheating, if it’s something you’re actively considering or are even talking with another person about, just take a moment to consider all the ramifications.

The affair could certainly lead to divorce. If you have kids, it will destroy their world. But it also destroys you. Because in the aftermath, only the most heartless and socio-pathic won’t feel an overwhelming sense of guilt.

With any big decision you’re facing, think about how it potentially alters your life 5-10 years down the road. If you see no impact on your future years from a decision, then just make it.

But if you see some huge potential downsides, as you would with an affair, then it’s worth not making a rash decision.

It’s also not worth putting yourself in compromising places (like at a bar after work with attractive co-workers). It’s certainly a bad idea to make a decision under the influence of drugs or alcohol.

So change your routine after work, take a break from drinking (my wife and I both quit for about 3 years around the time of my affair), and even stop hanging out with certain friends who might be a bad influence.

Focus on being the best version of yourself and then set about fixing the real problem in your marriage.

If you or your spouse is wondering if you should stay married after an affair, I dove deep into this topic in a recent article where I outline exactly how to figure that out and I got some surprising answer from 6 noted marriage experts.

Just click the link to read it now on my site.

As for your sexless marriage, this is ultimately the real issue.

It’s very unlikely your marriage has always been sexless. So what you need to do now is figure out what changed and how to fix it.

It’s crucial though to avoid:

After all, this is the person that supposedly means the most to you in this world and something is wrong. So why wouldn’t you want to address is in a kind loving way that lets them know you support them?

Do let them know how you feel. But focus on your feelings and not on what they are doing to cause those feelings. If you let them feel safe they won’t be on the defensive. Then they will be more apt to talk to you about what’s really going on.

Why people choose to not have sex with their partner varies, but some of the top reasons include:

If you have already cheated once, but you and your spouse are working on fixing things, rebuilding trust is crucial!

I recently wrote an in-depth article which goes over all the steps you need to take to prove you won’t cheat again, including the 1 mistake almost all cheaters make in trying to rebuild trust.

Are infidelity rates higher when your wife won’t sleep with you?

Now we’ll look at the infidelity rates of sexless couples. Bur first, let’s first understand how many people cheat in relationships, to begin with:

As we mentioned above, about 15% of all couples are in a so-called sexless marriage or relationship.

Ironically though, the data doesn’t seem to support the idea that someone in a sexless relationship might cheat more.

Dr. Kenneth Rosenberg, addiction psychiatrist and the author of the book ” Infidelity: Why Men and Women Cheat” (click the link to see it on Amazon) notes the following as the biggest reasons men and women cheat:

In a recent article, I compiled an amazing list of all the Infidelity Recovery Statistics (click to read on my site), so check those out and see what your odds are.

Did I answer all your questions about whether it’s OK to cheat in you are in a sexless relationship?

In this article, we took a look into the world of adultery and cheating.

Specifically, we explored sexless relationships and how that might be a reason some people cheat. And we looked at whether a lack of intimacy was justification for having an affair.

Ultimately, we answered the question is it ok to cheat if you are in a sexless relationship, with a resounding no. Cheating is never justified.

But the answers ARE out there!

If you’re in a sexless relationship, how long has it been that way and why?

If you feel like your marriage is worth fighting for, then do yourself a favor and watch this quick video on how to Mend Your Marriage (click to watch the video on their site)

The video walks you through everything you need to know about saving your marriage, even if your spouse isn’t sure they want to.

link to Marriage is Hard Work (but worth it!)
13 Reasons that's OK

There are a lot of folks out there who say marriage shouldn't feel like work.  Or if it feels like work, you're doing it wrong.  After more than a decade of marriage, I think marriage...

Everyone knows about NASA or the San Antonio riverwalk. But I wondered where some of the lesser-known family fun vacations in Texas were. Here's what I found out: Austin has many great...