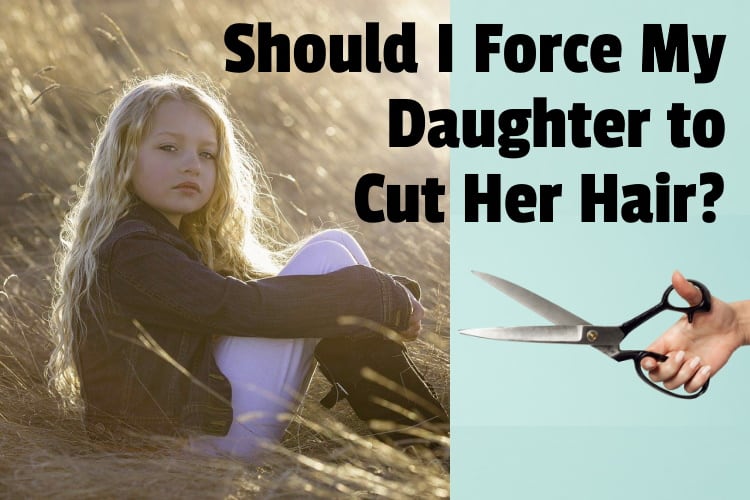 It’s not unusual for parents and kids to have disagreements over clothing and appearances. Girls tend to have long hair, but sometimes it gets out of control and is hard to keep neat. You may have asked, should I force my daughter to cut her hair?

Here’s what I’ve learned as a parent:

As a general rule, parents should not force their daughter to get a haircut except for a minor trimming of split or damaged ends. While it is important to be consistent with rules and values that really matter, parents should be flexible when it comes to less important things, like hair and personal style.

Allowing children to have some amount of control over the small things will prepare them to make good decisions down the line.

But that’s not all there is to talk about.

In this post, we’ll discuss reasons why your daughter may not want to cut her hair and why forcing her to do so could be detrimental to her and your relationship with her.

@whydontwemusic My daughter, 8, has has 13” of hair cut off and she is donating it to a kids cancer charity. I’m so proud of her! What do you think? pic.twitter.com/oSq9s0yy6n

Why doesn’t my daughter want to cut her hair?

There could be many reasons a daughter does not want to cut her hair. Young children often have a lot of anxiety around haircuts. They don’t know what to expect, and there are loud noises and strangers in their faces.

It could be that your daughter just doesn’t like the process.

She doesn’t like sitting still in the chair, getting hair in her face, and on her clothes. Maybe it’s too noisy, or other sensory issues are happening for her.

If your kid is afraid of getting her hair cut, try using different terms.

By simply saying she needs a “trim” instead of a “cut”, you’re making it sound less scary. “Cut” is usually associated with pain. “Trim” hasn’t been associated with anything, so it’s not scary.

You could even let your daughter bring a friend along. Turning a haircut into a spa day with mom and her friend will make her feel special. It will also be a nice bonding experience.

Older kids may be struggling with anxiety. School is harder, friendships are more complicated, and it’s more important than ever to be stylish.

Kids will often encounter some type of anxiety in their lives. Sometimes it’s not very serious, but sometimes it can be a true anxiety disorder.

To read more about anxiety in teens, read this recent article.

Fortunately my mother never cut my hair. I did cut my eldest daughters hair once, remember that pageboy style that was a bit of a thing in the 80s? Anyway, somebody said it look like a pudding basin cut so I never did it again… I actually thought it looked quite good 😂 pic.twitter.com/PLsYwWjUdK

Should I cut my daughter’s hair boy short?

It may be tempting to cut your daughter’s hair in a boy style for easy upkeep, but allow the child to make that decision for herself.

The good news is that hair always grows back (except sometimes for old guys like me, lol)

It may be tempting to just cut all of her hair off, especially if it is already on the verge of becoming unmanageable. Very long hair can be time-consuming to brush, wash, and keep in good shape.

But if you teach your daughter how to take care of her hair at a young age, then it really won’t be an issue. Of course, you should set some boundaries, particularly if she is unable or unwilling to take care of it.

What was that, you ask?

I know it sounds confusing, but there are different parenting styles that psychologists have researched over the years.

Check out this recent article where I take a deep dive into different parenting and attachment styles.

Just click the link to read more on my site.

All that being said, my then 13-year-old daughter asked me to buzz cut her hair with clippers a year ago, and I obliged. She ended up letting it grow out, but she wanted to experience it.

She did it, liked it, but has now moved on. Like I said, hair always grows back. But the resentment that could have come from my refusal would have lasted a lot longer.

My daughter cut hers and then asked me to just “even it out”. I was like “Where do I start?” Considering I have zero hair skills, I did ok. pic.twitter.com/nw6GsbweMw

How often should a toddler girl get a haircut?

For a toddler girl, longer hair can be cut 2-3 times per year, while shorter styles will need to be trimmed every 4-6 weeks. But she may not need a haircut until age 3 or 4.

And honestly, my youngest daughter, currently 3 ½, has never gotten her hair cut.

We do brush it daily, use a spray-in conditioner to help with tangles, and wash it with shampoo and conditioner at least a couple of times per week.

The nice thing about long hair is that you can wait longer in between trims. Longer hair is easier to trim at home. It’s more forgiving than shorter hair and doesn’t show mistakes easily.

Longer hair can go six months before it needs to be cut. But it’s a good idea to have your child’s hair trimmed two to three times per year to keep it healthy and to encourage growth.

Many parents choose to make the first haircut something to celebrate. Turning it into a celebration could make the process of getting a haircut much less stressful for both you and your daughter.

Be sure to choose a good kid-friendly hairdresser.

There are several chain stores that are kid-friendly and just plain fun. They may have really cool chairs that kids can sit in or TVs where they play cartoons. Some even give treats when the cut is over.

Why won’t my teenage daughter get a haircut?

Teenage daughters often both rebel against what their parents want and go with current trends they see on social media and at school, and this may include not wanting to get a haircut or cutting or dying it in unusual colors.

But whenever your daughter leaves the house looking not quite the way you hoped, remind yourself that she is a teen now. It is good and right for her to make her own decisions.

Your daughter is her own person, with her own ideas and opinions. She is figuring out her identity, including her likes and dislikes about her personal appearance. Part of being a teen is trying new things.

It’s also how we figure out who we are and what we’re capable of.

This is a normal phase in life. Fighting about it could cause resentment and really damage the relationship.

I’m willing to bet you’ve had a less than flattering hairstyle at one point in your life. You and your parents made it through. You will make it through, too.

As your daughter grows, she will have to learn how to make good choices as she is faced with all kinds of decisions. She will encounter more serious issues where she will need your input and guidance.

If you trust her with the little decisions, she’ll be more likely to come to you with the larger, more important decisions.

My second daughter hates her natural curly afro hair and doesn’t like having “short” hair or getting teased.
I’ve told her she has such beautiful hair and will see how many likes she can get on twitter.

Please show your love for her natural curls ❤❤ pic.twitter.com/4eX3ommSiY

Will my daughter get teased if she has short hair?

Daughters may get teased for having short hair. Surprisingly, it will probably be by boys, not by other girls.

But as I said above, my oldest daughter once asked me to buzz cut her hair with my clippers. I did, and it looked great, and she got a lot of compliments, and I don’t recall her getting any teasing or bullying from it.

As I said above, the good news is hair always grows back, so it’s really not a big deal to let your teens experiment a little as long as it doesn’t go against the school dress code.

Boys, especially middle and high school boys, will say things like, “why do you have short hair?” or, “short hair is for boys!”

They’ll probably make comments when teachers aren’t listening. They’ll say them on the playground or on the streets.

While this may be unpleasant, it can be a lesson for girls. It will teach them that their choices can bring a certain amount of attention, whether they want it or not. And that boys will feel entitled to share their views on how a girl looks.

It can also teach her to stand up for herself. She likes what she likes, and that is okay.

These experiences, while she is young, will toughen her up against a world that judges them and wants to break them down to fit into a certain societal norm.

If you’re worried about your daughter’s confidence, consider putting her in an after-school program that encourages kids to work through challenging situations.

These can be martial arts, team sports, dance, theatre, or other things. The most important thing to look for is a teacher or coach who inspires and motivates your child.

To read more about confidence-building activities for kids, read this recent article.

Did I answer everything you wanted to know about whether you should force your daughter to cut her hair?

In the grand scheme of things, haircuts really aren’t that big of a deal.

It’s a great time to let your daughter have control with zero risks to her health and safety. Small decisions with small consequences will give your daughter a glimpse into the adult world.

The kind of consequences that happen in middle and high school are the things that can teach her how the outside world is and how to deal with it.