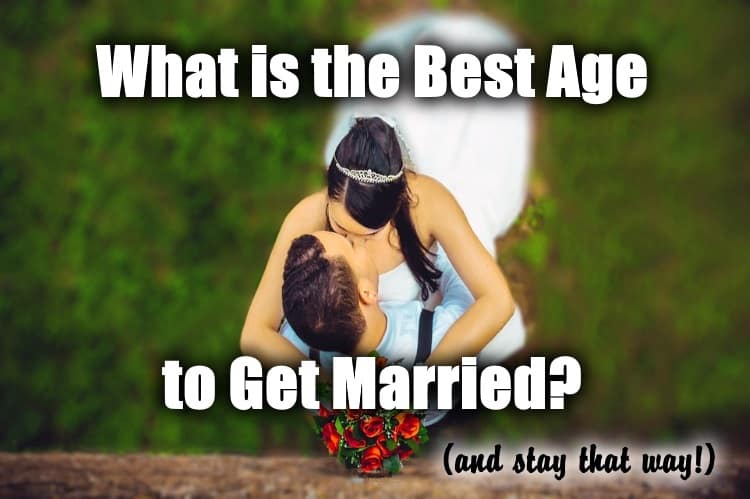 For my first marriage, I got married just before I turned 21. I know, in retrospect, that was way too young, so I began to wonder what is the best age to get married?

I decided to research and see what the statistics tell us. Here’s what I found out:

But there’s a lot more to know about average ages for engagements and marriages. We’ll also examine the worst ages that more often than not lead to divorce.

So let’s dive in!

For more great marriage statistics, also make sure to check out my 15 Surprising Marriage Statistics by Age Group (click to see my complete list). The biggest shocker was

What is the average age to get married in 2018?

According to the US Census Bureau, the average age to get married in the United States is  29.8 for men and 27.8 for women.

So what does that tell us? Right out of the gate, it tells us that millennials are waiting longer to get married than Generation X and Baby Boomers.

It also tells us that men are slightly older than women when they get married the first time.

Another interesting takeaway is that 54% of young adults up to age 24 are still living at home, which explains the delay in getting married compared to previous generations.

Of course, different states see different trends compared to the nationwide average, so here are some of the most notable exceptions for certain states in the US.

So if you’re anywhere around age 30, just know you’re right in the target for the age most people are getting married these days.

For more great marriage statistics, also make sure to check out my 17 Astonishing Infidelity Recovery Statistics (click to see my complete list).

What is the best age to get married?

Generally speaking, the ideal age to get married is slightly higher than the average ages are.

Date, get engaged, figure out how life works, but if you are between 20-24 and want to get married, you have upwards of a 40% chance of getting divorced.

But even waiting until age 23 reduces divorce rates by 50% from what they are for 20-year-olds.

The make that story worse, if you think you’ll just get it right the 2nd time around, 2nd marriages end in divorce a whopping 60% of the time.

Marriage IS hard work, so don’t go into marriage expecting it to be easy.

Even if your dating life was smooth sailing, once careers, life, in-laws and especially kids come into the picture, things have a way of getting complicated. But I wrote this article which breaks down not only why it’s hard, but also why it’s so worth it.

But the big surprise I discovered in writing that post was how much longer happily married couples live compared to divorced or single people.

What is a good age to get engaged?

We know from the statistics reviewed elsewhere in this post that dating for a minimum of 3 years produces the best results in terms of how long couples remain married.

Then we also know that for men, the ideal age to get married and not get divorced is age 35 and for women, it’s age 30. But anywhere in the 28-32 age range does produce great results in terms of couples staying together.

We also know that, according to The Knot, couples date between 1-2 years before getting engaged.

So, if we do some math, that tells us the following in terms of the ideal age to get engaged:

So to sum up, the ideal age to get engaged is between ages 28-33 with an overall ideal length of dating and engagement being 3 years.

23 is the absolute youngest age you should get married.

Generally speaking ages 20-24 are the absolute worst ages to get married and not end up divorced. The longer you wait from those ages, the more your chances improve.

But we know scientifically, that between ages 28-32 are the ideal average ages to get married, so while it’s perfectly fine to date, and get engaged, to give your relationship the best chance of success, don’t be in a hurry.

Beyond getting married too young, you’ll also want to avoid the Top 3 Reasons for Divorce (click to read my article that breaks them down). See if you aren’t as surprised as I was to see what reason #2 was.

How long should you date before marriage?

Well, the answer here is probably longer than my wife and I waited.

But here we are, very happily married, many years later.

According to a University of Texas study, 25 months is the best length of time to date before marriage and stay happily married. That study examined 168 couples over a 14 year period.

Emory University backed up those findings with their own study of 3,000 couples.

So what that tells us is that you ideally want to date for 2-3 years before tying the knot.

One question that comes up all the time when dating is this person “the one”?

People sometimes drive themselves crazy trying to figure out if the person they are in a relationship with is their soulmate. If you’re questioning that too, you’ll want to check out this article I wrote that breaks down the soulmate signs coincidences.

Most importantly, you can read the difference between a soulmate and a twin flame, as a twin flame is definitely NOT someone you’d want to marry.

Did I cover all you wanted to know about what is the best age to get married?

In this article, I took a look at marriage ages and trends.

We explored the average ages people get married and compared that to previous generations. We also looked at how the age we get married impacts divorce rates.

What age did you (or will you) get married?

To get your marriage off to the right track, make sure and check out my Marriage Resource Page (just click to see it on my site)

That’s a page on my website reserved for the very best tools, guides, products, and programs designed to make marriage a little easier. If it’s helpful for marriage and I know about it, you can bet it will be on that page!